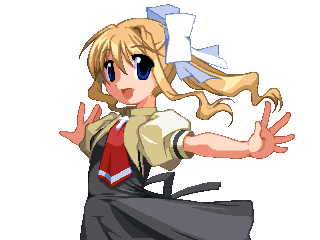 Kamio Misuzu (神尾 観鈴) is the EFZ version of Guilty Gear’s Testament, with her moveset taking strong inspiration from his. As with Testament, a major aspect of her neutral game is to control the opponent’s approaches through the laying of traps, which activate on contact. Unlike him, she also has the ability to set a curse on screen, a projectile which slowly moves in a given direction, pressuring the opponent to move in on her. The opponent thus finds himself caught between getting pushed in by the curse, and a wall of traps in front of him. These moves combine very well with her high priority normals, and should the opponent hesitate and chose to retreat, she has the ability to charge up a feather counter, giving her access to crow supers which significantly strengthen all aspects of her game. Once she lands a clean knockdown, her traps, hoverdash and juice lockdown give her elaborate oki options and curse combos, which add significant unscaled poison damage.

Misuzu is the main heroine of AIR, a visual novel produced by Key in 2000. Misuzu is a school girl in the town where the story takes place. She is a cheerful, slightly clumsy girl, and has a great love of both dinosaurs and pulpy-peach juice. She lives in an isolated house with her mother Haruko, who doesn't play with her or even cook for her, and who finds drinking as her main joy in life. During AIR, Yukito becomes close friends with Misuzu, as they struggle together against a supernatural curse that has continued for 1000 summers...

Stage: In Front of the Kamio House (神尾家前)

The normal move table can be found under Misuzu Kamio/Move Data.

The special move table can be found under Misuzu Kamio/Move Data.

If you find yourself out of the enemy's range, start laying those traps and projectiles. Create juice traps in your spare time. Create book traps and curses while the opponent is down or blocking your Sora projectile. Adding traps will increase the number of things the opponent must keep track of, and may cause him to pay less attention to you, or use less complex strategies.

At the corner, 214A is particularly dangerous because it allows you to wall loop off of a landed 2C.

Replays for all of these combos can be found here.

A good place to keep Misuzu would be at her maximum range of her 2B. From here, she can do the following: 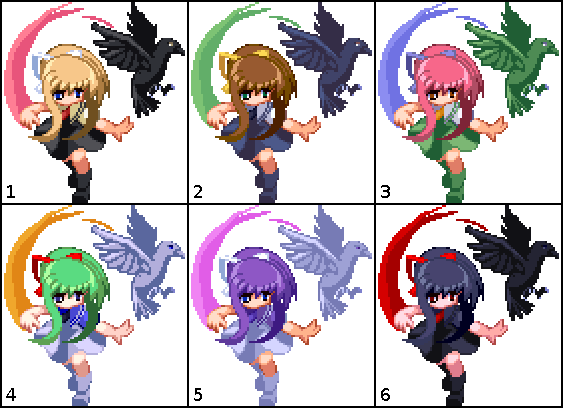