Despite having an unusual hover dash, Kurata Sayuri (倉田 佐祐理) is the closest thing EFZ has to a Street Fighter style footsies character. Her normals are some of the best in the game, while her mixups are fairly weak and straightforward, leading to a much slower paced fighting style based on poking and whiff punishing. Which is not to say that she completely lacks mixups, especially in the corner. Her hoverdash, although slow, can be used to crush lows and land an overhead, while with 2 super bars she gains a 1F super command throw. In terms of specials, she gets some slow moving projectiles to cover her approach, while her Magical☆Press gets her a corner knockdown from anywhere on screen. Defensively, she has a number of reversals, and one of her more unique specials, the counter move Ah, Got Your Skill. This move can counter any melee hit, regardless of whether it’s a high or low. Once a move has been caught, every time she blocks it she will flash white. Pressing a button during that flash will trigger a genocide cutter guard cancel/alpha counter.

Sayuri is a supporting character of Kanon, a visual novel produced by Key in 1999. She is a normal third-year student at the high school that Yuuichi goes to, and has been best friends with Mai since they first met during first-year. She is very polite and formal, but has a strange habit of addressing herself in the third person. During Kanon, Sayuri supports Yuuichi becoming Mai's friend and does what she can for them, and she stubbornly stays by Mai's side even as the strange incidents surrounding Mai continue to escalate...

Sayuri's main gameplan is to abuse her obnoxiously large and high priority normals to poke, whiff punish and generally Street Fighter her way to victory. Sayuri will get most of her damage out of capitalising off the opponent's mistakes and abusing command grabs when the opponent becomes too respectful of her normals and pressure.

Sayuri's normals are some of the best in the game. On the ground she has f5B for an excellent eye height level poke that can sometimes be used to smack people out of the air. 2B is another excellent tool which covers the area below that of f5B. 2C is a decent anti air for when aerial opponents get too close for comfort and leads easily into juggle loops if it connects. In the air she has jB which has incredible horizontal priority. jC trumps this however, in being her best aerial normal. Sayuri's can neutral jump jC to stuff ground and aerial approaches alike.

As for specials, her main tool is 623A. With 8F of startup and a huge hitbox that moves forward with Sayuri, this move has lots of uses. You can add it after f5B/2B pokes and be relatively safe on block/RG, or just use it as it's own neutral tool. Mixing it up with her other neutral tools can make for very surprising forward movements covered by a genuinely disgusting hitbox, leading into a knockdown. Speaking of knockdowns...

If done correctly, Sayuri can have some seemingly endless blockstrings if she manages her meter efficiently. Her main blockstring tools are: 41236A, 623A IC, 236A/B, 236A/B IC to catch mash/reversals, c5B f5B .. c5B f5B frame trap, and generally using her pokes at a safe distance (f5B and 2B, occasionally cancelling into star or 623A).

Her simplest and most predictable string is 2AA 2B 5C 41236A. If not for Recoil Guard, this string would be inescapable. You can repeat this over and over and the only way to beat it is to RG the 41236A. This will be the basis of our blockstrings. From this, you can adjust the string and begin to vary the timing of the hits. For instance, instead of 41236A which is fairly slow, you can instead use 623A to try and catch your opponent off guard. In the same sense, you can do 2AA 2B 236A/B and even FIC into f5B to prevent the possibility of jumping out. Keeping your strings varied and unpredictable will make it harder for your opponent to Recoil Guard, giving them fewer chances to steal your turn.

Every 8 seconds you will get access to Red IC, allowing you to go for riskier setups using IC. One example is 236A/B IC IAD jAAA - this forces a mixup situation of how many highs, when will they stop and go low, will they go for a command grab after the star is blocked, etc etc. Another option is from the mixups listed in Okizeme: using 66jC j236B FIC overhead or c5B, and as another option using the insane priority and invulnerability on j412C to predict reversals.

Sayuri's rising ground dash has a unique property - if she jumps after dashing, she will keep some horizontal momentum.

This momentum is stored until:

Doing a neutral jump after a dash will show you the amount of forward momentum that is stored. When doing a forward jump the stored momentum will be added onto the usual momentum of Sayuri's forward jump.

Doing a forward jump from the ground with the stored momentum is possible but requires forward and up to be pressed on the same frame. If 8 is pressed too early, you will get a momentum neutral jump. Pressing 6 too early will give you a regular forward jump. One trick to get a momentum forward jump from the ground is to make it impossible for air inputs to be executed, buffering a ground special during this time and buffering j9 during the ground special. The string will look something like 66 jB (whiff) j236B j9. During the jB (whiff) you buffer the 236B, and because you're already performing a normal j236B will not come out. Instead, you'll get 236B upon landing, allowing you to buffer the forward jump with ease. She can also do it after 66 j236A, buffering the j9 during the star. The jump wont come out until she hits the ground, even though Sayuri is capable of double jumping after 66 j236*.

This has applications mainly in neutral, and especially after a ground star. The added momentum on Sayuri's forward jump allows her to keep just behind the star while it's travelling, and can be quite surprising if used sparingly.

Basic combos that are core to Sayuri's gameplay. Beginners should master this section before moving on.

These combos build upon the essential combos.

The timing of your tech punish should always aim to grab the opponent after the earliest possible air tech, this timing will cover all possible tech timings. You can see the timing and some examples here, and an extremely late tech example here.

Sayuri is one of the few characters with the ability to launch into a juggle combo without having to use meter. If you have good reactions and timing, you'll be able to get 3k+ damage without having to spend any resources. The setups are character specific, and the most stable pickups are listed below. All combos are started from point blank, the 2A's are used for spacing and allowing you to hit confirm properly. Midscreen combos leave out the enders due to changing drastically depending on distance from corner and particular combo route, these are noted with [...]. For timing purposes and spacing purposes, microwalks are sometimes used - this is simply walking forward a very small amount. These are intended to be used as a starting point for learning star launches, as the situations where they can be used in matches are a lot more complicated - you are encouraged to experiment with their practical uses on your own.

Same for both standing and crouching

Not viable or very unstable.

Same for both standing and crouching

Looking for different routes? Something in the middle of Beginner and Advanced? Situational or character specific combos? Check the combo overflow page.

Compared to some characters in EFZ, Sayuri's okizeme is lackluster. Her main crossup oki tool is jB, which has a crossup hitbox to boot. Converting from hits using this is tough and Sayuri definitely has better, albeit more expensive, setups to use.

j412C is absolutely incredible. It has 38F of invul at the start, with the only downside being 5F of vulnerability with no hitbox cover before the second half the the move. The initial hitbox is huge. Please check the move list above to fully appreciate the hitbox. This makes it an especially scary okizeme tool - while it is possible to punish, it is difficult to properly time a 4F 5A before the second half of the move starts.

Off a lot of midscreen knockdowns (most commonly being 623A) you can go for a same side jC or a crossup j412C option select. To do this, IAD (instant air dash) after the knockdown and as you crossup the opponent input j412C in the opposite that you are air dashing. Essentially, this makes the input j632C. The game will auto correct the direction and go towards the opponent. If you end up doing an IAD that's too low to crossup, your j412C will just turn into a jC allowing you to land and confirm into a regular ground combo. To see followups for the crossup version, please use this reference.

With 22F of startup, 66jC is the fastest Sayuri has for an overhead. She can combo from this easily with j236B FIC, which you can see here. Has the ability to stuff lows and leads to some nice damage. Your alternative option, which you'll be using more often, is c5B. This is a Sayuri's longest reaching low and can be tough to use at first, as it requires some knowledge of the range at which close normals activate. Hitconfirming c5B is made easier by the fact it has an extra 6F of special hitstop.

The distance you can use 66jC on a crouching character from varies depending on the matchup. Below gives a very basic indication of which characters 66jC'd at point blank and which cannot.

Sayuri's star projectile can be used to create mixups on waking up opponents. Using 236A IC and instant air dashing over the opponent, with correct timing you can stay the same side of crossup. This setup is very easy to choose the side on, and if you choose crossup you can use j412A to convert from hits. You need to input this the same way you would the j412C crossup listed above, meaning you'll have to input is as j632A after you cross the opponent up.

After her RF Magical☆Pressure, Sayuri is capable of using a correctly timed 66jB .. jC 66jB(whiff) juggle combo to make a hard to see gap in the corner (or no gap at all), creating left/right opportunities. The 66jB(whiff) acts as your tech punish. You can see the setup in action here. The tech punish combo can be found here.

When your opponent begins being overly respectful, not mashing and just blocking, you can bring out the tool that makes Sayuri genuinely scary. Magical☆Thunder (6321463214*) is a command grab super that deals a lot of damage, especially compared to Sayuri's usual combo damage output. The only useful versions are Level 2 and Level 3, as Level 1 is jumpable post super flash rendering it next to useless. Level 2 and 3 cannot be jumped post superflash so they must be predicted or the opponent must be mashing or holding jump in order to beat them. These command grabs have decent range, you don't have to be standing right next to the opponent for them to connect, but you can be no more than a few paces away. I'd recommend testing out the ranges of Level 2 and 3 respectively to get a feel for their uses. 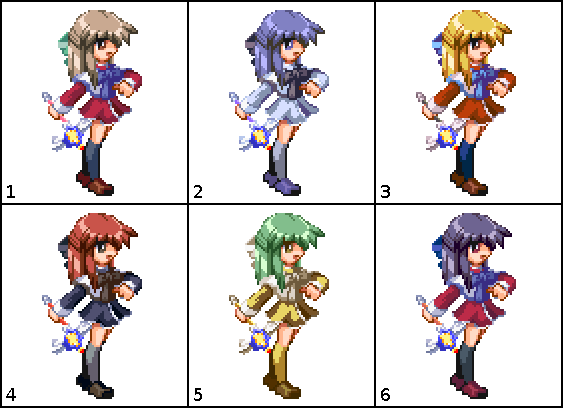