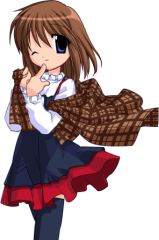 Misaka Shiori (美坂 栞) might look like a zoner at first glance, but she is actually a very versatile character who can fit many different roles. Her ice cream beam and ice block specials allow her to pester the opponent from far away, and can make it very hard for anyone to get close. Her rushdown-oriented air normals and dash attacks also give her plenty of ways to get her own pressure started. In the corner she can open people up with endless frame traps and one of the best throws in the game, both leading to high damage combos. These aspects can further be enhanced by summoning a snowman, which helps her out by providing cover in neutral and allows for extended blockstrings after a knockdown. Add in fairly safe reversal options and you have a character who can deal with almost any situation.

Shiori is one of the heroines of Kanon, a visual novel produced by Key in 1999. She is a first-year student at the high school that Yuiichi attends, but has been absent for a long time due to her prolonged cold. Shiori regularly hangs around the school's courtyard during school hours, simply standing there for long periods of time. During Kanon, Yuiichi takes Shiori out and starts getting close to her, but soon finds out that her sickness is not what it seems...

BGM: Behind that smile (笑顔の向こう側に)

The normal move data table can be found under Shiori Misaka/Move Data.

The special move data table can be found under Shiori Misaka/Move Data.

Shiori boasts a number of classic zoner tools, normals with excellent frame data and range, and reversals that, with at least red IC, are fully invulnerable until active and will trade at worst. She can play both a very lame keepaway game, or use her plus frames on her dash normals to play an oppressive rushdown game. Her throw is considered one of the best in the game due to its ability to meterlessly combo from it. Her supers vary in usefulness, but Shiori can use a few of them to meter dump in most combos for a very good damage increase and hard knockdown.

Shiori has a plethora of zoning tools, including a screen-long beam, a falling glacier, air knives that cover a wide area, an antiair super, and a snowman that can also fire an ice beam. Shiori can cover all methods of approach by smartly using these tools.

Most of Shiori's combos can carry the opponent to the corner, or most of the way there. From there, she can start on her rushdown game. Shiori's dash normals have great frame data and her normals are quick and have good hitboxes. The main downside is that 2A is not a low, but 2B more than makes up for it. The combination of these allow Shiori to also run a nasty tick throw game, leading to good damage since she can combo off of it in the corner. Even if the opponent isn't in the corner, Shiori has some nice mixups midscreen off a throw. 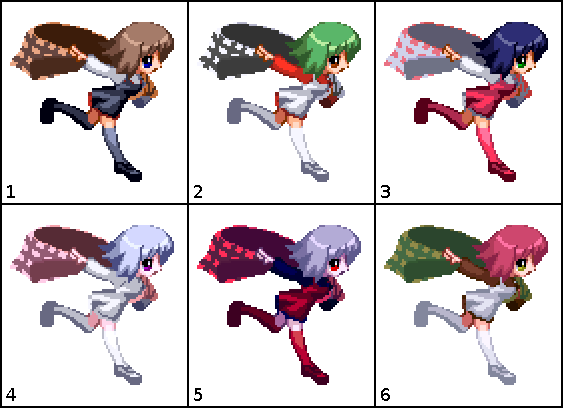