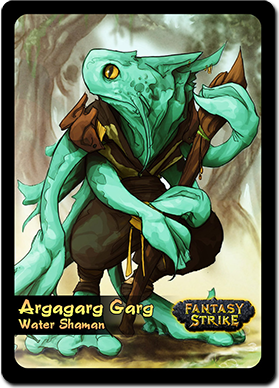 Argagarg is a careful and wise elder Merfolk from Murkwood Marsh. He’s known for patience and non-violent diplomacy, though as a practical matter he is very capable of defending himself.

Argagarg is an extreme zoner with great tools at most ranges but with poor mobility and no reversal.

Argagarg can damage opponents over time with Poison Fish. When Poison is on the opponent's life bar it will slowly drain, once it reaches the end of the health bar it will hit for 1. Poison does not drain if Argagarg is in block stun and if he is hit all Poison is removed from the opponent.

Argagarg can still summon the Goldfish during Rushing River or Pop his Bubble Shield while in block stun, making rushing him down difficult.

(2 damage, on deep hit)
Corner Only

, with gold fish followup) to prevent walk-in and jump-in from opponents, capitalizing on such to get extra damage with

to get chip damage/sneak a poison fish through/catch a jump in/push the opponent away. It's really all about maintaining proper spacing.

If you find yourself in an up-close battle, you will need to rely on

to punish the opponent and get them as far as possible from you. Typically Arg will only win up-close if the opponent makes serious misplays or... you use

is Arg's most powerful tool and possibly the best reversal in the game. Using it creates a cinematic pause which allows you to peek at what the enemy player is doing and buffer an input to react. Are they throwing? Yomi counter. Are they hitting

simultaneously to avoid damage while punishing with bubble pop! Then take advantage and create space so you can get back to your primary game plan.