Fantasy Strike uses a left and a right directional button for movement, plus a jump button. There are three attack buttons and two optional buttons for throw and super.

Directional left and right buttons are also used for changing what attacks are executed. 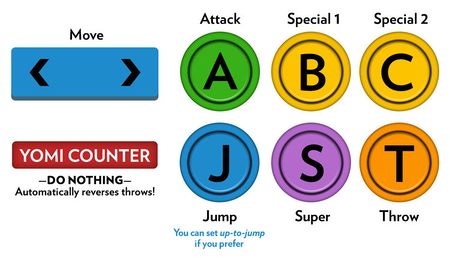 for backwards and forwards walk.

will do a backwards or forwards jump.

will perform a normal attack on the ground or in the air.

will give a different normal.

will perform a special on the ground or in the air. For some characters,

may give different versions of the special.

will perform a throw on the ground, throws cannot be blocked.

will give a throw that side switches.

will perform a super on the ground or in the air. Supers require a full super meter to be used and will deplete it after being executed.

away from your opponent to block attacks.

Yomi Counter - Release all controls and enter an idle state. Any throw done with

will be countered and you will gain full super meter.

This Wiki uses a visual icon notation that aims to be easy to read and serve as a middle ground.

The community will often use a concise notation that consists of letters.

Due to numpad notation not gaining traction among the community it has not been adopted for this wiki.

Alternative input methods found in the Button Configuration in-game. 2-button macros must be inputted within 3 frames of each other.

Jump - Jump may optionally be performed with the Up direction.

Throw - Throw may be performed with

Super - Super may be performed with

In Fantasy Strike, you always get an 8-frame input buffer. Whenever you press the

buttons, if that move is able to come out within the next 8-frames, it will.

This doesn't apply to movement buttons, however you can simply hold

and it will happen the first available frame.