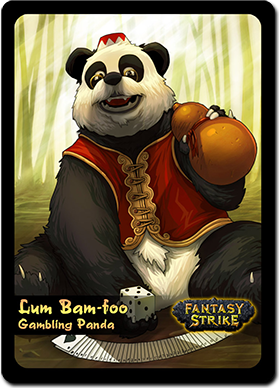 Lum knows how to play the odds, though he's happiest when things are out of control.

Lum wants to have space and throw as many items as possible. Even Zoners have to approach or put significant pressure on him or else Lum will build up momentum with a barrage of item setups that snowball him to victory.

Lum can throw out random items with his Item Toss Special and Slots of Items Super. These items can be to his advantage or disadvantage; playing Lum requires adjusting strategy on the fly in reaction to the game state.

(3 damage, only on crossup vs Rook)

(6 damage, on deep hit as above, requires a properly positioned item)

(3 damage, can mixup with throw before coin lands)
(Coin hits) >

> (Lightning hits) (2 damage, knocks down, works with any move other than

too, can mixup with throw after

, resets - can meaty roll, in corner can crossup meaty roll)

Upward Claw will anti-air or juggle effectively into a reset, which you can hit with a meaty Panda Ball - in the corner, this can even crossup!

A blocked melon toss gives you room to toss an item safely, or even perform a jackpot they'll still be in blockstun during the cinematic for! A particularly close low melon toss will combo/blockstring into that jackpot, if you want to live dangerously (or know they can't trivially punish after blocking it).

Slots of Items will often trade with attacks, or even beat them if their hitbox never reaces you or they are only active during its invulnerability. In particular, it beats throws that start before 1 frame prior to the cinematic, though it will lose to a throw that starts exactly during or on the frame before the cinematic.

Panda Ball is generally your strongest anti-air, given the room to use it - time it such that you hit them as they land. Just make sure you hit them from behind as they're landing, so they don't counterhit you!

Catch someone who thinks they're clever and is trying to fuzzy guard between your jump-in jA and your empty jump throw by using a melon toss just before you land!

In the corner, anti-airing from close up with nA leads into item toss into a mixup between nA and a microwalk tick throw. If you are too far, the nA will whiff, destroying the mixup and thus making this fuzzyable.

In the corner, anti-airing high with jA combos into nA, leading into a meaty nA or B. Anti-airing lower will not combo, but instead knocks down.

While nA x gC is unsafe up close as they can throw punish it, from close to max nA range it's safe! Note in particular that you will be here from pushback after a non-ambiguous sameside jA, a low corner melon toss, or a low melon toss followed by a microwalk. From here you can:

After you've knocked down your opponent (usually from forward throw), these are the typical setups you will use (for more detail, see 'Janet's Thoughts on Lum's Oki Tools' in the Guides section):

Your key spacing is given by rolling into your opponent. This is the same distance on hit or block, and is very relevant to Lum's spacing in general. Assume all non-oki routines start at this spacing, and all oki routines start with a forward throw. If a routine branches, eg, 1a 1b 2aa 2ab 2b, then that means that 1a only leads to 2aa and 2ab, and 1b only leads to 2b.

Janet's Thoughts on How to Dice