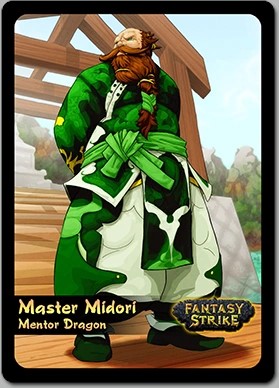 Master Ando Midori trained siblings Grave and Jaina in martial arts and honorable conduct. He can transform into a green dragon during battle.

Ando Midori is from a lineage of extremely powerful martial artists who have tapped into the ability to take on forms of the Dragon. His master taught him and his brother Menelker a wide variety of techniques, including some of deadly force. Midori believed that some of these dark arts were too dangerous to be practiced and should not be passed on to other students. Menelker disagreed, saying there is no right and wrong in a technique and that passing up ultimate power for reasons of honor is foolish.

Midori is a man of honor though. He eschewed the dark arts and taught only the respectable forms of martial arts to Grave and Jaina. Midori delights in teaching and nurturing, feeling vicarious happiness and satisfaction from seeing his pupils flourish.

In fact, Master Midori believes in honor above all else, and instills respect and ethics in his students, as well as physical training. His master before him taught techniques too deadly to be used, and Midori saw first-hand how that power warped his now-exiled brother. Midori protects his students from such taboo knowledge.

The blood of green dragons flows through Midori's body, and he can take the physical form of a dragon for short times when his focus is strongest. His personal fighting style is defensive and solid, but his dragon form allows for powerful offense as well.

s, which is backed up by his ability to parry attacks in human form.

As a Grappler, Midori has extra health and does 2 damage on Throws and Yomi Counters.

Midori has two distinct movesets, a Human Form and a Dragon Form. Properly using the strengths of both to cover the weaknesses of the other is necessary to win play Midori.

A A (2 damage, KD)
fA A (2 damage)
jA A A if close (4 damage, KD)
jA fA A (4 damage)
jA bA (3 damage, KD)
against airborne opponent, nAA, jA, with a followup of B or bA depending on the distance and height of opponent On oki, you have B (crossup), jA, and followup with fAA for damage or bA for knockdown jAA B AA B

Your basic strategy without

is to walk forward until you are in grab range. At that point, you can threaten a mixup of

. During your approach you can ward off jump ins, reversals or other attempts to keep you out with neutral

(which has a very good anti-air hitbox) or

(parry). It's important to remember, however, that

is not a true reversal and can be meatied, beaten or even blocked if timed wrong.

If you do land a successful

you gain an empowered stance which is quite powerful, giving Midori the ability to automatically beat any vulnerable move when close. How best to utilize it is dependent on the matchup but often you will want to pressure with frame advantaged

available your options increase significantly, especially against zoners, who may decide that the best strategy is just to run away from you forever (get used to it because they're gonna keep it up). Specifically,

gives you a 0-frame cinematic pause to examine the screen, just like Argagarg's

. During this pause you can assess the game state and then buffer a move. This is best used in two situations: To punish a zoner's projectile with Dragon

or on wakeup/during defense to figure out what kind of attack your opponent is doing.

As you may understand by now playing Midori requires patience and careful assessment of the fight. Your basic moves do not have outrageous hitboxes, extreme frame advantage or lots of k/d. Much of your time will be spent walking forward, pursuing an opponent and preventing them from escaping your mixup pressure.

While in Dragon form, Midori has a more complicated and powerful toolkit but a much larger hitbox and the downside of nearly inevitable reversion to human form, which does have recovery frames. One of the most useful tools is actually the cinematic pause during

You will want to take the most advantage of Dragon form that you can so acting aggressively but safely is key. Punish zoners (or whiffed attacks) with either

(if close enough), in order to knock them down and set up oki. Once you have achieved this, you take advantage of the same mixup combination available to Rook and Setsuki:

as it counters jump outs and does a two hit two damage combo which k/ds again, but opponents will be aware of this and block. So be sure to occasionally use

(when you think they will yomi counter).