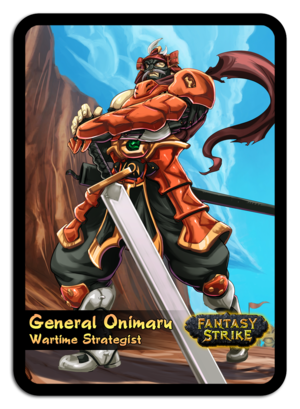 General Onimaru commands the Flagstone military. He's an expert on tactics and strategy. In combat, he relies on deliberate, powerful strikes with his sword.

Onimaru is a slow but powerful fighter. If he can land his attacks on an opponent (blocking or not), he can quickly cause a lot of damage.

Rather than dealing chip damage from special moves, Onimaru can guard crush you by making you block 3 of his sword attacks within a certain amount of time. This effectively treats you as being hit as if you were not blocking at all.

(if it hits an airborne opponent) >

Onimaru is a slow character, but its long sword range, powerful and armor moves (

) are good tools to keep its adversaries at bay.

One of Onimaru's strongest moves is to perform

, which will only combo on counter hit, but will cause 4 damage when it lands, and on block you can always follow up the Tactical Slice with a parry (

) or one of the other attack options.

Use your attack moves to apply guard crush and setup a high damage move, or to force your opponent to react.

If you're dealing with zoners, use

initial motion, to get past projectiles while applying pressure.

is also good against projectiles, as it stays in air for long, allowing to jump over projectiles, and also eliminates them at the end of the move with the ghost skulls, and it also is a long reaching attack.

), varying the followup between parry and attacks, to keep your opponent guessing.

When you knockdown your opponent, punish them with a meaty

, which allows you to easily follow up with different attacks (or parry), or even a