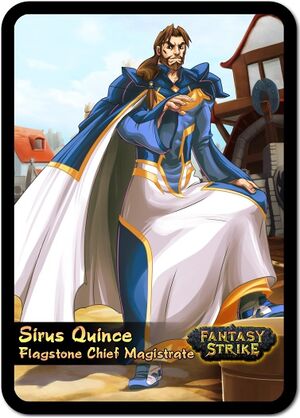 Sirus Quince is the head of the Flagstone Dominion, a position he attained through political prowess, the right words, and a wholesome image.

Quince used to be a lawyer and has faced DeGrey in court. DeGrey’s obsession with truth should be the most powerful weapon against Quince’s rhetoric, but somehow Quince’s deflections and deceptions gave him the upper hand. Buying the court helps too.

Quince is a character that excels in confusing his opponents. He achieves this with his clones, which allow him to force the opponent to guess which one is actually him, giving him a strong mixup game on top of many ways to bait reactions in neutral. Both of Quince's super moves are also very good at aiding in confusing the opponent. Quince's ground super, Patriot Mirror, triggers a state called Two Truths when it hits the opponent, allowing all of his clones to be able to physically hit the opponent, while his air super, Consent of the Governed, summons 2 clones afterwards, making it visually harder to see what Quince is doing. Quince is a little on the weaker side defensively since his only reversal, g

, has very long startup, and Patriot Mirror will usually result in a trade. Quince's pokes are also somewhat slow, with his notable ones, f

, with startups of 15 and 16 frames respectively.