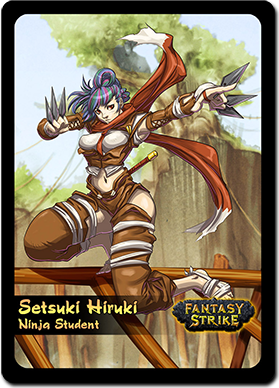 Setsuki is a diligent student and excels at one of the key virtues of the Fox's Den: speed.

Setsuki has the best mobility in the game as well as the most varied mixups but has bad defensive options, especially against jump ins.

Can cancel into Super.

(or the more passive

and walk in quickly underneath it) then use her mixup game to confuse/bait/exploit.

It cannot be overstated how important it is to learn to quickly and carefully walk forward at an opponent. You will be forced to react quickly to block pokes trying to keep you out but it is the safest and least reactable method.

Her mixup game is strongest standing close to a knocked down opponent, with the following primary options:

This is not an exhaustive list but covers the basic options in close neutral or from oki.

Once in, Setsuki wants to knockdown the opponent then pressure with a mixup option that minimizes her risk and punishes the opponent's attempt to escape or reversal. Conditioning the opponent to do something and then punishing it is Setsuki's secondary level of strategy, where you put the opponent in a mixup mixup.

While you are learning Setsuki, do not rely on

, as tempting as it may be.

is punishable on block (with

) by all characters at almost all spacings.

should be used very sparingly to punish mid-range projectiles on reaction.