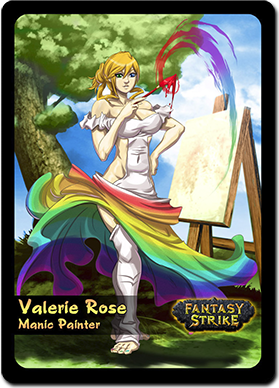 Valerie has heterochromia, meaning she has one blue eye and one green eye. She "sees things differently," and expresses herself through painting. Emotionally, she experiences highs and lows, which she believes gives her even more appreciation for the full spectrum of human feelings.

Valerie is a Rushdown character that dominates the ground and controls space very well. Even if you are not hit by her attacks, she can threaten so much damage on block that even an opponent that is blocking will still lose health. Valerie can perform some of the highest damage combos in the game but can struggle under pressure.

Her Rainbow Disc Super can lock opponents down for long periods of time, giving her access to both high damage and chip as well as opening up several mixup opportunities. Chromatic Orb, her other Super is her only invincible move, so she must decide whether to use Meter offensively or defensively.

Valerie has a Rekka ability, called Three Colors, meaning it has three different moves that can be done in succession by repeating the attack. Each of the attacks has different options for mixing up the opponent and advancing to the next attack is completely optional. The final attack allows Valerie to advance, retreat, or even crossup, forcing opponents into a mixup situation.

Valeries main gameplan centers around getting the opponent to defend against Three Colors. Though extremely powerful up close she needs to be able to approach first.

Use her high walk speed to close the gap, this is the safest way to approach. Against grounded opponents use fA to beat out their moves with it's superior speed and reach. Once inside fA range you can begin using Three Colors. To deal with projectiles, neutral jump and jB can get her past most fireballs. Up closer, the projectile invincibility of Rainbow can get Valerie past some fireballs or if she has meter Chromatic Orb can punish projectiles on reaction.

To control the space around Valerie, a combination of neutral jump A,A and fA will wall out most opponents quite effectively.

Forward jump is a strong approach to get in, with it's long jump arc and strong air to air priority from jA,A. However, this is a double edge sword as the long arc makes her extremely vulnerable to being anti-aired. This should not be her primary method for getting in.

Each move within Three Colors should be considered a different option. If treated as a long, branching set of options it becomes much more unpredictable and more difficult to defend.

Delaying or finishing Three Colors early allows for the possibility of catching opponents mashing and extending your turn. Additionally, using back or forward to alter your spacing is important.

After a throw you can walk back a bit and do jB for ambiguous meaty cross up that also safe jumps, Valerie is plus enough afterward to do a Cyan, Throw mixup on block. Watch here.
After a throw if you want to use the disc you have to use it low to the ground, forward jump and S just before you land. The safe timing and height varies depending on the opponent.

-Use bA to punish blocked dps, same damage as BB but it’s +6 which lets you do more mixups
-jS has short invulnerability that makes it useful for air to air
-Sometimes when you have frame advantage they try to get out of your pressure by jumping, do C to cover that option safely (-1 on block) if they get hit you can combo to A/fA/B for 2dmg. You can also go for jAjA A/B for 3dmg