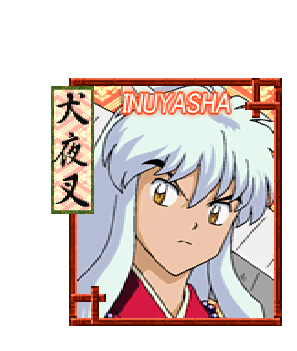 Inuyasha is a very well-rounded and straight-forward character, with many great normals, simple combos, easy to use yet very powerful specials and good projectiles. He appears to be the game's primary shoto on the surface (and can most certainly be played as one), but is more akin to a projectile zoner when played optimally due to his main strategy being heavily based around his 6SP and j.6SP to form a revolving stream of projectiles.

Startup DOES NOT include the first active frame.

Inuyasha is a very strong character with his 6SP move being a heavy reason for this. In neutral your general game plan will be to perform 6SP immediately followed up with Instant Air j.6SP (96SP, similar input to an IAD) and repeating this pattern. The air projectile pushes Inuyasha backwards and has slightly less recovery, allowing him to create space and act sooner than if he had done just the normal ground projectile. Many characters in the game have a hard time dealing with this level of zoning.