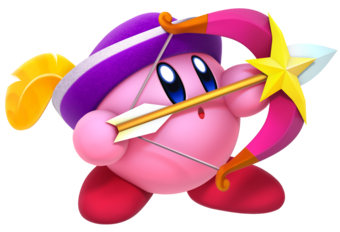 
Archer is a strong zoning character for the most part who also has a couple of options for close quarters combat. His long range zoning tools are Shot (5B), which can be charged to three different stages and aimed up or down, and Hitman (2B), a crouching version with less flexibility but faster startup. Archer can also antiair with Sky Shot (8B), although it only goes straight above him and cannot be aimed to the sides. At close range, Archer has one melee option with Arrow Slash (66B), which is relatively small for a dash move but pretty fast. One of his strongest options overall is Leaping Quiver (66 > j.B), which is a good midrange option when used from the ground and a strong long range pressure tool from platforms. While Archer has a pretty limited combo game, he is able to combo into and out of 66jB from certain ranges. He is also the only character in the game who can crawl, but it moves very slowly. Overall, Archer is a zoner with modest damage output and mediocre close range options, but he has a strong keep away game if he can set up, and good anti-zoning tools due to the speed of his projectiles. Choppa Wednesday.