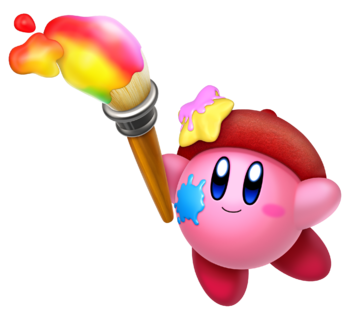 
The Artist copy ability is a setplay based character with large disjointed attacks, and high damage setups that can be performed using Painter (2B). Artist has a fairly limited moveset compared to some of the cast, but each of his moves greatly contribute to his gameplan. His general playstyle is that of a hybrid zoner, because his zoning is not nearly as oppressive as other characters, and his various brush attacks encourage him to be somewhat close to the enemy at times. Artist does best in situations where he is able to keep his opponents within range of Brush Splash (66B), but not too close to be unable to create a Painting. He excels at corner pressure, but has a poor disadvantage state due to his generally slow moves.