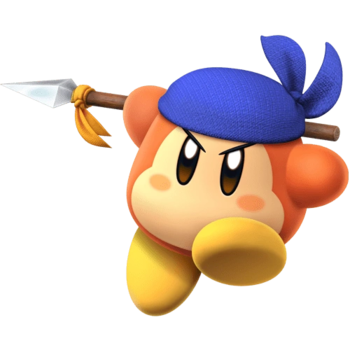 
Bandana Dee is the friend of Kirby and King Dedede who wields his spear with pride. He has great range on most of his moves thanks to his disjoint and active frames, giving him great neutral. He also has decent damage on combos, and one of the best rushdown moves in the game with Ground Thrust (2B). He has some of the best disadvantage in the game, thanks to his great jump and Moon Drop (j.2B), which is also long, disjointed, and active. His only real weaknesses are air to airs, as while he can juggle the opponent with Skyward Thrust (8B), he has few good horizontal options in the air.

Neutral
Bandana Dee has some very strong neutral tools. Spear Thrust (5B) is very long ranged and active, allowing him to safely poke and beat out other moves. It also can't be crouched under like Staff's moves, making it very dangerous. Additionally, Multispear Thrust (5B > B) is one of the most active moves in the game, meaning it has hitboxes that will beat most other moves in the game for a majority of the animation, and it's strong on block. Ground Thrust (2B) can be used to break neutral and force offense, as its many utilities (such as being able to jump out of it) allow for crazy stuff. 2B will beat weak projectiles and trade with or beat most other moves in the game, only getting beaten by other moves with longer range, and on hit it will lead to combos. It can also be used as a mixup tool, by jump canceling it into fast fall grab, a mixup that will catch many off guard. Waddle Spear Throw (66B) can be used in neutral fairly well, as it covers a nice angle for catching jumps, and on hit, can combo into 5B or 2B. Waddle Spear Barrage (66[B]) covers even more angles, making it extra useful, and is a strong tool to use. However, 66B can be beaten by physical attacks, so it isn't great against attacks with long active frames, and it will get stuck on platforms, making it annoying to use in stages with large amounts of platforms or platforms low to the ground.

Advantage
Bandana Dee's pressure, while not the greatest, is still strong. 5B sets up for stagger pressure and tick throws. The first 5B can be done into grab for a tick throw, or a staggered 5B > B to bait the opponent dodging since it's super active. The same can be done with 5B > B > B, by staggering the final hit of the autocombo or going for a grab after 5B > B. This is a very simple but strong mixup Bandana Dee has access to. He can also do mixups with 2B. After the second hit of 2B on block, it can be jump canceled then fast falled by pressing down(2) twice while in the air. From here, you can go for a grab with Y to catch a blocking opponent. However, if the opponent expects the grab, you can do 5B to hit them, or if they block that, you can do 5B stagger pressure and tick throws. Either way, 2B puts Bandana Dee in advantage even on block. 8B can be used to keep juggling an opponent and keeping them in the air when the opponent tries to go above. However, the hitbox is thin so you need to have good positioning and movement to use it to it's greatest degree.

Disadvantage
Bandana Dee has some of the better disadvantage options in the game. Because his jump is very fast and maneuverable, Bandana Dee can get away from combos and setups better than other characters while still being able to attack back if the opponent tries to attack them. j.2B is a great option to get out of the air, because it's very long, disjointed, active the whole way through, and safe on block while putting him in advantage on hit. j.2B is also faster than it looks, so it's very safe to use. It also can be used immediately out of a jump for his fastest attack option, making it have its uses.

Main bnb combo, just the autocombo. Wall bounces in corner, putting you at an advantage unless the opponent has longer range than you.

Easy 2B starter combo. Can be hard to time the jump cancel.

Similar to the last combo, but you use 8B. Does less damage but puts the opponent above you in a juggle situation, which 8B excels at.

Very difficult to land but very high damage combo. Also leaves you in advantage regardless of what ender you use, and you can even catch the opponent sleeping with more follow-ups.

Does more damage than doing the regular finisher, and leads to a juggle situation where 8B is good.

2B starter corner only combo. Deals more damage than the regular 2B starter into jump cancel but less than the [B] combo.

Bandana Dee has no hats, he only needs his bandana.