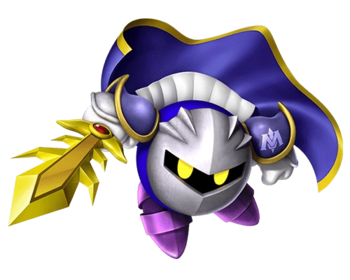 
Meta Knight is a close range fighter, with an almost exact replica of the Sword moveset with a few huge differences. For starters, he has non-float jumps, he has Condor Dive, and his Shuttle Loop is basically what makes Meta Knight "Meta Knight." Meta Knight is one of the few characters in Kirby Fighters 2 who wants to actually get in your face with his moves. Most other fighters lack mobility or movement options, which is where Meta Knight excels. Despite his lackluster reach, Meta Knight's Shuttle Loop (28B) let's him approach any fighter from the air. Land canceling this attack gives Meta Knight plus frames and can lead into tick throws.

Also notable, Meta Knight has an infinite, which is preformed by doing repeated Shuttle Loops in the corner.

Shuttle Loop let's Meta Knight fly at his opponent at fast speeds while putting them into a dangerous situation where Meta Knight can get plus frames by land canceling after an attack. Shuttle Loop has a lot of freedom combined with Meta Knight's jumps meaning, in general, you want to be using this move over and over again.

If you find yourself in a situation where Meta Knight cannot Shuttle Loop (such as Magolor Black Hole being placed, or an opponent with a really good anti-air,) and if you're already up close, Meta Knight's ground game has plenty tools to work with. 5B does decent damage and throws the opponent far away. His 66B also covers a lot of space quickly and combos. While somewhat useless, always try to keep your beam charged because it never hurts to have a projectile. In general on the ground, running up and holding block is also a viable strategy because Meta Knight can easily retreat to recharge his guard meter.

No hats are available for this fighter.