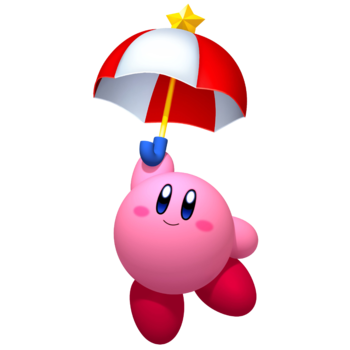 
While Parasol has a relatively small amount of moves, his moves almost all have multiple uses and effects. He has a projectile shield by holding Parasol Swing (5B) that has a hitbox behind him when he lets go of B, a high-damage long range move with Parasol Drill (66B) which can be comboed into and out of, a fast and high-damaging divekick with Parasol Dive (j.2B) that has big combo potential on hit and leads to grab mixups on block, and Parasol Twirl (2B) which isn't much of a neutral tool but does a lot of damage as a combo finisher. Beyond that, Parasol also has a command grab in Circus Throw (c.6B/c.8B) that does a bit more damage than a regular throw and lets you to choose where you throw your opponent (to either side or straight up) by holding that direction. One of Parasol's strongest attributes is being able to hover in the air after dash jumping with Parasol Drift, giving you a lot of control of your sideways movement in the air while having access to 66jB or j.2B at any time. This allows Parasol to move in a way that no other character can while airborne (with an active hitbox above him!), while threatening with one of the strongest horizontal whiff punish tools in the game or a fast safe downward combo starter.

The grounded version of 66B usually has more hits connect and therefore does more damage than the aerial version, but it usually does not let you combo after it

Most damaging combo so far at roughly 85 damage, does not work if you get to a corner before the very end, may not work vs SDI away unless you're fighting Dedede

Most effective in the corner, as you cannot true combo out of the reverse hit of the jab. However, if they block you can immediately turn back around and command throw or quickly jump and j2B.

Corner only - must throw them towards the wall. Does not work if you're touching the wall or if you're too far away. They should make contact with the wall around the highest point in the throw.

Corner only - works when closer to the wall than the range for the previous combo. You can sometimes combo into a 2B at the end, but it's inconsistent and probably better to go for a mixup. You can generally tell visually when the 2B at the end will or won't work.