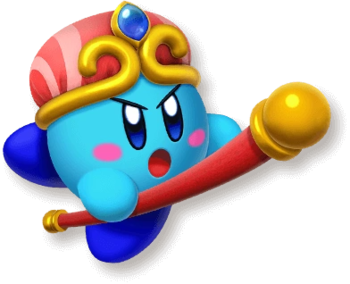 
Staff is a ranged fighter, with a variety of moves to pressure from long distances. Staff Jab (5B) and Long Jab/Super Long Jab (66B/66[B]) are his main grounded tools, and the regular jab starts off a multihit during which Staff can switch directions, or stop after any of the 4 hits. His other grounded moves are L-R Jab (2B), a relatively quick move by staff's standards that hits on both sides, Spinning Staff (28B), one of the best antiairs in the game, and Up Jab (8B), an mediocre move at best but it is faster than 28B and combos out of a successful 28B hit. Staff has only a couple of aerial moves, but they're extremely important. Pole Vault (j2B) is both a solid move for pressure and and Staff's best (and only) movement option. After Pole Vault, Staff gains access to Unrelenting Staff (5B after j2B), a large move with big damage that can be used in either direction at any point in time. While Staff can succeed when he's able to keep his opponents at a long distance, he struggles to keep most fighters from getting close. He has underwhelming damage output on everything except Spinning Staff and Unrelenting Staff, and only has two grounded moves that can hit crouching opponents (66[B] and the final hit of 5BBBB). His long hitboxes cover a large area in their respective directions, most of his hitboxes are very thin, leaving blind spots in the area diagonally above him. While these are a lot of weaknesses, his combination of a strong air camp game and an elite antiair can make him a scary counterpick in the right hands.