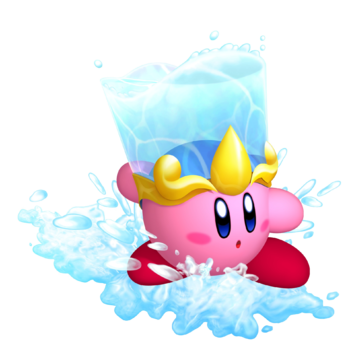 With a unique dash and an extremely versatile kit, Water Kirby is one of the most technical characters in the game. Combos that flow into each other extremely well and fluid movement options allow Water Kirby to get in and drain the opponent's health bar. He can fire a full screen projectile with Water Attack (5B) to help approach or bait out options that he can punish with ease. Thanks to said projectile and other useful moves such as Fountain Hover (j.2B) he can also play defensively, which is especially useful against certain bad matchups such as Bomb or Paint. Despite it's high skill ceiling, Water Kirby is one of the most versatile characters in the roster and is a great choice if you're looking for a well-rounded character with multiple options for almost any situation.

Water has a very free-flowing combo game, and it's possible to link most moves into each other. The main combo moves are dash (66), dash turnaround (66 > 4), and 66B. There are a lot more combos, but these are some basic ones.