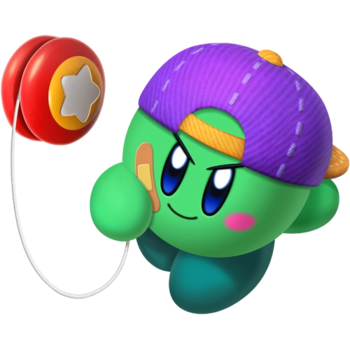 Generally, you'll be wanting to stay at Yo-Yo Throw (5B)'s max range, as it's a solid poke and can hit classes like Staff/Baton or Artist when they can't hit you. If someone tries to whiff punish with a dash attack or other advancing moves, you'll want to throw in Walk the Dog (2[B]) to have a constant hitbox out in front of you. That being said, Yo-Yo has tools that can be used at closer ranges, but 5B and 2[B] shouldn't be used up close because of their relatively low reward. You should also use Yo-Yo Orbit (2B), as it hits on both sides (useful for punishing missed divekicks) and leads into Gazer Spiral (28B) for some pretty good damage. Yo-Yo Up (8B) is just generally a good anti-air because of all the space it covers, so there's a lot of jump-ins it can stop. It can also combo into 28B, but it's not always a true combo. Next up, there's Break Spin (66B) and Jump Spin (66 > j.B). The main difference between them is that if you mash on the ground, you rise into the air (which lets you extend with air bullets, which lead to 2B), and if you mash in the air, you'll stay at the same altitude, allowing Yo-Yo to get in on classes that would normally out-space or out-zone it, such as Bomb or even Magolor in some cases. Finally, we have Yo-Yo's Hammer Drop (6B), which can be used to reposition opponents to places more favorable. Opponents thrown backwards can be combod into 2B (which can be combod off of) and you can put out a 5B to cover opponents thrown forwards (done by pressing 6B during the 'holding' phase of 6B).