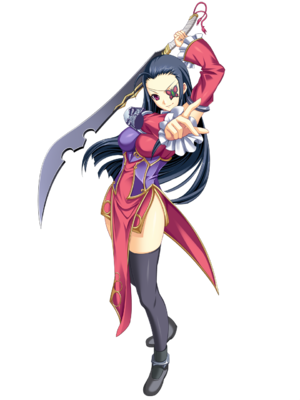 Twin sister of Kakōen, this mighty warrior of Gi wields a giant sword known as the Hungry Wolf of the Seven Stars. Wholly dedicated in both body and soul to Sōsō's grand cause, she will not be satisfied until all who oppose Sōsō have been destroyed. Emotional and passionate, she can be somewhat simplistic and naive.

Kakouton has some of the best close range pressure in the game. Her long reaching 5A can be confirmed into 623A or 236A+B, and also combos into 236A on CH. Her 236 series pushes opponents outside of poke range, giving her some of the safest frame trap options in the cast, while also pushing opponents to the corner. Work your way up close, then use a mixture of 5A into throw, 5AA, or 236A to open your opponent up.

Intermediate difficulty combo - solid damage and reliable for netplay. Works from starting position to corner. Closer to the corner you may need to replace 2C with cl.5B.

Variant for the above combo for when you’re too far from the corner to connect the 3B. Do not use this one close to the corner or they’ll fall out of 623AB before it launches.

Anti-air route that works regardless of screen position.

Extended anti-air route from fullscreen. You may need to replace 214AB, 2C with 214AB, cl.5B depending on positioning.