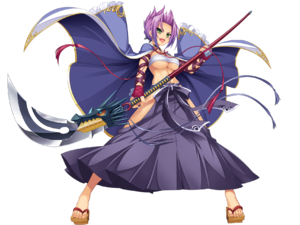 A commander for the Tōtaku army who holds morality and valor in high value. A proud warrior who finds joy in displaying her martial arts prowess. She has a friendly rivalry with Kan'u (Aisha). Her weapon is named the Flying Dragon Crescent Blade.

Chōryō has good midrange normals with which to poke and harass the opponent, as well as very strong whiff punish, antiair, and anti-fireball tools to counter reckless attacks. She has excellent corner carry and meter gain with which to build her advantage and shut the opponent down.

Chōryō's moveset is well-rounded and does not heavily favor any single assist. Assists that offer lockdown or passive space control can help her start offense or shut down opponents, though additional utility and good reward on hit are welcome. Different matchups and/or playstyles may favor different assists.

Tei'iku (lightning) forces the opponent to block from halfscreen and puts a hitbox in front of them at further ranges. It crumples on hit, leading into c.C or jC for a full combo as well as Hougeki extensions. Jun'iku (pit) focuses on passive space control, placing a pit that allows for a followup combo if the opponent falls into it. It appears directly underneath the opponent if used from closer than halfscreen. However, the pit does not trigger against airborne opponents. Shoukatsuryou (wind) has limited range, but is very good for lockdown due to its long active frames and can extend Hougeki combos for even greater damage. Houtou (chain) offers full screen control with a combo on hit, good frame advantage on block, and nullifies meterless projectiles, but does not whiff punish effectively due to travel time.

Shuuyu (fire) is similar in use to lightning, but whiff punishes more reliably at long range and trips the opponent. However, Chōryō has little reason to stand that far from her opponent, 236AB covers the same range, and followup combos from fire are both less consistent and less rewarding. Ryomou (items) focuses on safely starting offense and locking the opponent down on wakeup. Kakuka (blowback) offers a safe reversal, albeit one that does no damage and has minimal utility otherwise. Chinkyuu (kick) is good at shutting down the opponent's movement and has no screen flash, but is difficult to properly confirm for full reward on hit. Kaku (ice) is generally not useful for Chōryō given her already strong anti-air and anti-fireball game.

Typical poke/jump-in/punish confirm. Launches the opponent away, but deals decent damage, has very good corner carry, and gives you time to run after them or build meter with stance. 236A is the easiest to confirm pokes with, while 236C deals the most damage.
Use c.B and c.C starter for punishes, and 2C for very minus punishes where you can't reach with c.C. Follow 236X with stance AB instead of A to secure additional damage and knockdown for one bar.

Spaced corner confirm. C (low) slash is more consistent than A here. Stance followups aside from AB slashes do not work after point blank 236X; either take the knockdown and meter from stance or use 623X point blank instead. If the opponent is a few steps out of the corner and wallsplats high enough, 236X>236A~D~X is possible.

Knockdown confirm off of A normal mash. Uses one bar. Slightly more range than the meterless A confirm. Can extend with D~AB for an additional 450 damage at the cost of a second bar.

Harder DP confirm off of 2 A normals. Can cancel to D~AB instead for more damage and a knockdown for one bar. More damage than the above route for the same meter spent, but doesn't allow spending the second bar for max damage. Also works off c.B and c.C if point blank.