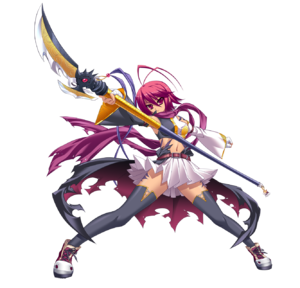 The mightiest warrior in the Three Kingdoms. So strong that none dare approach her, she is forced to live a life of unending solitude. Despite this, she is actually a simple, cheerful girl who loves to play with cats and dogs. Her weapon is the spear known as the Sky Piercer.

Ryofu is a grounded footsies character with very long-range buttons (5B), good confirms from 2B, and the ability to significantly close the gap with her special moves by charging forward. Her Hougeki starters have fairly deceptive animations (6B and 6C look very similar in their startup) and she has a fairly good anti-air game as well. Although, her most consistent anti-air is her DP, not 3B. Overall, a very solid character. Don't forget that her 2A is not a low.

Corner variant of the above route