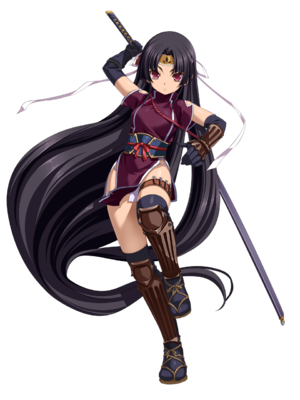 Loyal, reliable and sharp-tongued, she is serious to a fault and pure of spirit. With her longsword, Soul Cutter, on her back, she cuts her way inside the enemy's attack zone. She likes cats so much that she refers to them as "Master Kitties."

Do you like fishing? Then this is the character for you! Shutai's 2B > 214X forces a close range mix-up by pulling your opponent in on hit and her buttons are really long. 5B is as long as most people's 5C, and 5C covers about 2/3 of the screen in range. She can also zone a bit with air kunai. Shuutai excels at defensive footsies and eventually fishing for that one 2B that will get you a mix-up and possibly pressure from there.

Note however, that her 2A is not a low so her close pressure relies on being able to call people out with 3C/6B/Throw. Also, because she is able to throw kunai or cancel the command jump into a regular jump-in, she can trick people into using 3B and hitting them with kunai or condition them to expect kunai and then jump in.

Hougekis starters (aka these moves can start a Hougeki-chain on CH):

Hougeki bounces (aka these moves can be used in Hougeki combos as bounces):