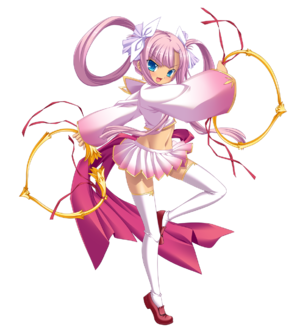 The youngest of the Son sisters, she is a vivacious and spirited tomboy. Hoping to be of some help in the rebuilding of the Kingdom of Go, she heads of the battlefield with her battle rings, Moon Beauties, in tow, but her sisters would rather she stayed at home.

Zoner, huge and unconventional buttons, can control space with flower fairly easily. Vine throw is situational as a neutral tool, but it guarantees her a knockdown off 5B and catches high recovery moves like fireballs easily. Her pressure game is alright, and her 2A is a great button despite being a mid. Her 6B is deceptively fast, and her 6C has huge range and is easily confused for her dash animation. Buttons are surprisingly fast and have farther range than they appear to visually, especially 5C. Also, her throw does little damage because you can combo from it, usually with 5C midscreen and 2C in the corner.