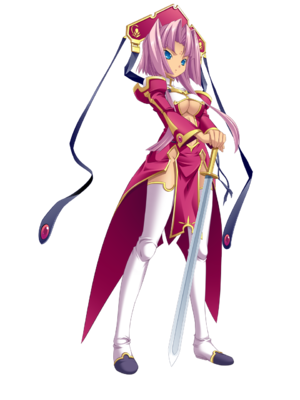 The second sister of the Son family, she is very serious and brooks no compromise. Driven to fulfill her task of keeping her kingdom safe, she heads for the battlefield with her trusty weapon, Conqueror of the South Seas.

Straightforward yet deceptive footsies character. Desk drop (214X) aka table chop allows Sonken to immediately get on your face, through projectiles, from the other side of the screen with an overhead. Her normals are decent, with 5A and 5B having better-than-average range within the cast. Her throw does little damage but can be combo’d into. 22X is air-invincible on frame 1, which a good alternative if you miss a 3B window. Her moves have very strange animations, like her 6B overhead, 2A (which is not a low!) and j.A. Her unique counter moves let her interrupt and punish predictable pressure strings without meter.

c.B is the fastest starter, 2B is your poke starter, and 3C is generally used only for jump-in combos.

Only 236AB is fast enough to combo from her A normals

Using 236A is easier, but does slightly less damage than using 5C or j.C. Also, if 236A is done quickly, the opponent will be able to air-tech afterwards. It's actually possible to force a hard knockdown off of Throw 236A, but that requires them to be specifically low. A useful timing trick for this is to hold 4 (backwards) during the throw animation and then follow up with half-circle A for the 236A.

Best oki in the corner. Enough frame advantage to go for another throw/throw bait with 6B or c.C

The easy near-universal ones, learn these when starting out:

A 3B starter doesn't allow using 3B in the middle of a combo, but you should end up with 4000~ damage and a corner regardless.
A throw after an FC offers more corner carry and is easier on timing and spacing, but scales down the combo by exactly 100.

Very range-dependent. The 6B won't land if youre too close to the corner, use 6C in ranges where you're too far for 6B.

Go for this when you have at least 1 bar of meter! Again, very range-dependent, but even with adjusting and omitting a 214x, you'll end up with over 5000 regardless.

Also works a bit further from the corner.