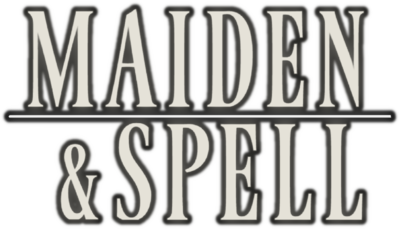 Maiden & Spell is a one-on-one "magical girl aerial projectile battler," featuring a colorful cast of ladies fighting with fantastic spells. The game is inspired heavily by bullet hell shmups, and there are no healthbars; getting hit is getting hit, and if you run out of lives, you lose the round.

Each maiden is color-coded and has a set of abilities unique to them, activated at a press of a button. In a sense, you play as both a shmup boss and a player character at once; by combining your attacks in intricate ways alongside your movement, you can create bullet patterns that are extremely difficult to dodge and pressure your opponent into hopeless positions, but dodging is almost never truly impossible, as your hitbox is just 3 pixels wide. But you can't escape forever; if no one has taken a hit in the last ten seconds, the walls will begin closing in, forcing the players closer and closer until the inevitable happens.