The core gameplay is extremely simple. You have a shot directed straight at the opponent and a shot which is directed to their sides, plus two special moves that are attached to cooldowns. By combining all of these together along with your omnidirectional movement, you want to create a pattern of bullets that your opponent won't be able to dodge, while avoiding letting them do the same to you. If you hit the opponent four times before they hit you, win the round; win two rounds and the game is over.

By moving around a lot, you can change the angles your opponent needs to dodge in order to avoid your shots and find the ideal positions where it's hard for them to avoid yours. Every character has their own preferred position to be in, and your goal is to find a place where your attacks can be threatening but your opponent's attacks are easy to dodge. Sun Priestess wants to get the opponent as far away as possible, while Hero of Frost wants to maintain a specific midrange positioning; Royal Arcanist wants to be horizontal to her opponent, while Lich of Flowers wants to set traps coming from as many angles as possible. By using your shots cleverly, you can force your opponent out of the position they want, so that the next shots you fire are ones they can't dodge at all.

Because your hitbox is very small, just 3 pixels by 3 pixels, you can come very close to bullets and still be safe. Because of this, any individual kind of pattern can be approached in many ways.

Micrododging, or just microing, means to dodge a shot by the smallest amount possible, or to dodge while remaining inside a pattern by positioning yourself so most of it goes around you. Microing is important when you want to stay where you are and not open yourself up to wide shots, but it's hard to specifically advance your gameplan while microing.

Macrododging, or just macroing, means to dodge around a pattern entirely and ignore the gaps in it. Attempting to macro a pattern is often somewhat difficult and may open you up to quick shots to the side, but finding the right time to do it can easily set up your preferred positioning and get momentum going in your favor.

Every character has a Defensive Special that can grant them some kind of invincibility. However, this doesn't mean it's just to be used to dodge stuff you otherwise couldn't! Certainly, you can use it that way, and sometimes will need to, but most of the time it can also be used to create offensive pressure or to maintain a threat, and the best way to use it is usually to do both at once, shifting the tides of battle by breaking through the enemy formation with the same move you used to create pressure.

Also, there's a bit of invincibility time after every hit! The person whose attack landed has 1.2 seconds of of invincibility, and the person who got hit has 3 seconds (but can't act for the first second and a half). Make sure to make the most of that time to set up and find the positioning you want.

Many characters' defensive specials have the ability to erase all "minor" bullets within a large area. This encompasses most bullets that aren't particularly large and don't linger in place for extended periods. A bullet you've erased is a bullet you don't have to dodge, so this is a powerful effect with lingering consequences beyond when the invincibility would end. Lich of Flowers is special, and her Novi Life ability can erase even major bullets, which includes all other attacks that can inflict damage. There are, however, also intangible effects which can't score a hit but can apply a status effect; these cannot be erased by anything.

Minor bullets (except beams) will also be erased if they touch an invincible player. This can be dangerous to intentionally go for, since it you run out of invincibility early you'll just get hit, but it can be useful to keep in mind against slow-moving shots that cloud the screen, like the wide shots from Sun Priestess and Depth Secret.

When a player is hit, the small area around them while they're stunned will erase any minor bullets around it. 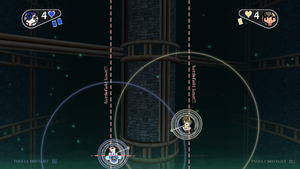 If no player has been hit for 15 seconds, the left and right walls will begin closing in from their starting position 2200px apart, shrinking the width of the arena by 60px per second, eventually forcing the players into close proximity. If a player is hit after this point, the wall will pause again and regrow a percentage of how much space has been lost, recovering proportionally more of the arena if the hit is later. If no one is hit for an extended period, the wall will eventually hit Battlefield Limit at 500px wide and will go no smaller; with no hits at all this takes just over 28 seconds after the shrinking begins.

The wall size is reset to its starting point between rounds.