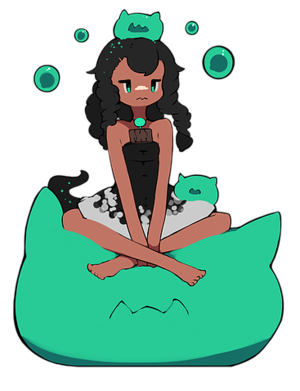 A long time friend and subject of the Dreadwyrm Heir, and a monster resident of the Kingdom of Stars. She dislikes fighting, but reluctantly follows orders.

She moves and attacks very slowly, but each attack carries a heavy punch. With whirlpools and watery hydra heads, her spells will quickly fill up the battlefield.

Your goal when playing Depth's Secret is pressuring opponents into an unfavorable position and forcing a hit. You have many moves in your kit to control space. For example, Your basic is a slow moving wall that cuts the screen vertically once it gets big enough, your wide is an invisible pressure circle which is used to force players to not travel to a specific area, your offensive special is the same as your wide except it covers more area and is more committal, and your defensive special is a quick way of dividing the screen horizontally.

Most of the time, you want your basic to be of danger to your opponent, having a player be between you and your basic is generally a bad position, so be sure to recast your basic if necessary or use your other moves to stop advances.

The last strategy text thingy was so funny, that we somewhat made a name for it. Ada's Blessing: When a player get's hit by a wide that both players forgot about.