Maiden and Spell/Hero of Frost 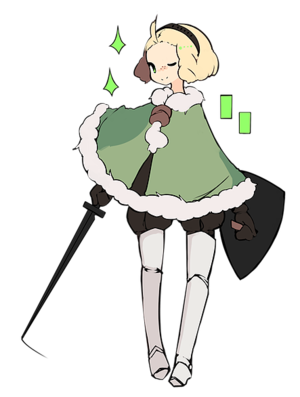 A knight serving the Queen of Frost. In the past, she, along with a group of brave adventurers, saved the Kingdom of Frost from certain doom, and thus became known as it's hero.

Her forward and brash personality is reflected in her quick speed when unhindered, but when she attacks she stays firmly grounded. Instead of an Offensive Special, she has a defensive dodge roll.

Hero of Frost is a midrange pressure character with a fairly intuitive kit. Having two invulnerable moves and many ways to modulate her movespeed, she's excellent at dodging, making her a good character for beginners to feel out the game's fundamentals and react to how each opponent works, while also giving advanced players a chance to make strong offensive plays by moving in unpredictable ways that suddenly having bullets coming from unexpected angles. While she may seem basic, she has a lot to offer.

You can tightly minimize the time you’re focused in between Swordstorms by releasing and manually repressing both Focus and Basic at the correct time. You have a 500ms window to cycle your combo, but attack lock is only 340ms, Movespeed Mult and Direction Lock are only 400ms.

There are a handful of benefits and decisions to make with this tech. The longer you delay the next basic press, the bigger of a gap there will be in the pattern, but the longer your targeting arrow will have to catch up to your target, and the longer you can move at full speed. On the other hand, the longer you delay repressing focus, the more you’ll be able to move between shots, but the less your targeting arrow will track your target. While it requires practice to maintain and make the right decisions with, it makes your offense much less linear offense and a better ability to keep up the pressure while microing and tightly controlling your movement.

Drifting is a natural consequence of using basic while Frost and her target are in motion. With Swordplay, stutterstepping, and roll combos, you’re simply able to move faster than your targeting arrow can keep up with. As a result, your attacks in motion may not actually target your opponent directly. This can be good if you mix up your movement relative to your opponent, adding an element of unpredictability to your patterns. By paying attention to how your opponent is moving and suddenly going from shooting one way to delaying just slightly and focusing to spin the targeting arrow back to them, you can exert a lot of pressure.

Since Dodge Roll extends your combo time and quickly repositions you, it can be used to mix up your offense in ways you would otherwise be completely unable to. Compressed and intersecting patterns created by incorporating a roll can be extremely powerful.

However, It’s important to note that rolling just for the offensive pressure alone is usually not worth it. Dodge Roll is strongest when used offensively and defensively at the same time. Dodging danger, getting into a better position, and following up with Swordstorm 3 all in one motion can be a devastating reversal of momentum.

Because this is normally something done opportunistically, you may be at different points in the combo when getting out of danger and setting up. Swordstorm 3 typically has the pattern that is most directly difficult to deal with, while Swordstorm 2 will go around the opponent if aimed on. However, by delaying your focus until the exact moment you basic, you can get your targeting arrow to still be offset from the opponent. This will unexpectedly swing Swordstorm 2 into them. Swordstorm 1 is fairly straightforward to use in situations where 2 or 3 are a risk.

Essentially combines roll combos with compressing your own patterns by moving with them. Advance into your own Swordplays and, when ready, Swordstorm > Roll > Swordstorm to maintain pressure while returning to your preferred position. Against a moving target, there will usually be a gap. The important part is that the gap will be somewhat unpredictable, and your combo will occupy your opponent’s focus while you return to your preferred range. Once you’re back in mid range, you can resume stutterstepping or wide pressure without missing a beat. Just take care to watch your opponent as you approach and not roll directly into their pressure.

If Dodge Roll is down, you can still do a somewhat weaker version of this by advancing with Swordplay 2 > Swordstorm 1 without the roll, a fine way to approach after being pushed out.

Repeatedly using Steel Sweep while positioning near an opponent can push them against a wall and make it difficult to leave without taking a hit or being punished. On its own, this does nothing, but your intimidated opponent will be easier to follow up on as you move to other methods. If you can successfully get them to a wall or (even better) a corner, Stun Wave becomes almost unavoidable when done out of Steel Sweep. Although it has an Attack Lock of 700ms, it's not an Action Lock, so you can do a Stun Wave immediately after the minimum action delay of 200ms. Since the normal safe zones for Steel Sweep are to back away or move through Frost herself, doing this against a wall is almost guaranteed to trap your opponent and requires either a defensive cooldown or extremely tight dodging to escape.