Maiden and Spell/Lich of Flowers 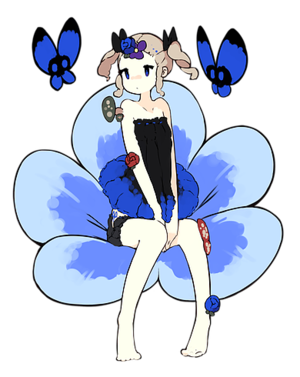 A monster that recently appeared in the Kingdom of Stars. She happily follows her new queen's orders, protecting the kingdom from outsiders.

She has trouble walking, and thus rides around slowly on a flower. Her attacks focus on a combination of non-moving flower bullets, and her butterfly thralls that attack the opponent of their own accord.

Lich is a setplay trap character. She's slow and she starts out a bit weak, but any down time to establish yourself quickly snowballs into significant stage control. You need to be good at micro to worm your way out of tough situations since you're the slowest character and there's things you just aren't able to macro out of, but as the stage opens up and you can set up more butterfly thralls, you can get your opponent being shot at from all sides with flowers slowly crushing them into the corner.

as you get more experienced with not always just immediately reusing butterfly, you can delay it by specific amounts to tune its shot synchronization to your other butterflies. For instance, delaying the recast by a bit under 400ms will sync it with the previous butterfly such that your shots are as far away from each other in time as possible. Getting different butterflies to fire at once or to reduce time between shots can open up new routes for defense and attack.

Setting up your flowers and growing them right means you can sometimes have a wall of flowers from the top of the screen to the bottom. Walking the flowers forward to pin people loses its efficacy in high level play, but even against strong opponents making this sort of wall is still an integral part of playing to time - there's no need to advance into danger when the wall on the other side will push the opponent into your flowers, after all.

In a lot of matchups, going for solid walls is punishable, since the opponent will know where you need to be to replace your flowers, and so the best thing you can do with your flowers becomes not to create solid walls but to replenish pivots and regions you can move through faster than your opponent can. With that kind of space established, you can move around and put more butterflies in more areas, attacking from more angles, and slowly choke the opponent out.

As the walls close in, you will sometimes find yourself with occasion to put a butterfly into a corner that is soon to be offscreen, where your opponent can't simply move around it and it will be firing from an angle extremely awkward for them. This isn't worth dropping your positioning to intentionally set up, since it does requires you to run against a corner, but if the situation comes up organically it is always extremely funny.