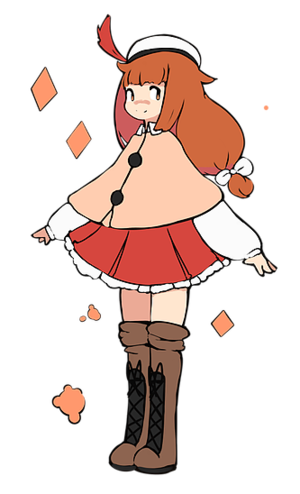 A priestess hailing from the Kingdom of Sand, to the south. With mysterious powers and secretive past, she supports the other adventurers in their travels.

​​Her style focuses on bullets that teleport directly to the opponent's position, having a number of attacks with long charge times and powerful effects.

this is the zoning character. when playing her, you wanna not be near your opponent. but if you can't help it then you wanna be RIGHT on them because that way its way harder to dodge sunburst and lat holy combos

it's pretty cool to just stay mobile and get a lot of tiny lat holies coming from a bunch of different directions. it's not ideal to just let your opponent roam free as you wander around but if they're chasing you and you're forced to move, remember that stuff you set awhile ago can catch back up and be pretty fortuitious as lat holy moves pretty slow.

shortened sunburst is really good at keeping people from approaching so easily. if close enough up so it's spawning in faster, if you do it while retreating some slower characters actually can't get to the side of it in time and will be forced to detour, giving you changes to set up. even faster characters can be shaken if it's done in concert with other stuff. mixing up your shortened and normal sunbursts can make you really hard to approach, and if you can force someone out it's diamond time.

Sun's offensive power comes out of overlapping your bullets; putting waffles or diamonds near or on other waffles or diamonds. You can do this in two ways: moving forward or channeling longer. Moving forward is cool since you don't need to channel as long and can therefore cram more casting in, but channeling longer is nice for when you want to keep a long ranged game going.

You gotta move either way. Putting yourself at weird angles to your opponent (not the cardinal directions) makes waffle patterns that require weird angles to dodge. This slightly larger demand will earn you some hits. Having lots of weird angles will demand that your opponents approach using more than one angle, which also increases the chance that they'll get hit. If you have a lot of waffles overlapping at a lot of different angles, you've made something that your opponent has to think a lot about to dodge. If diamonds are in there at the end, all the better. If a basic shows up too, they need to think faster (see worse).

Diamond spam is powerful so do it! Diamonds are tricky to dodge and when you overlap them, change their angles up, and never stop casting them they become a real pain. A Sunny approaching with minimum combo diamonds is proper terror. Lovecraft eat your heart out.

At almost any point it's good to throw in one or two basics. Usually one; if you're using basic you are creating time where you can't cast more wides or diamonds. Two is a nice mixup. Play around with how much you delay between basic casts. Three is great if you've got 'em in a corner, especially if they're in the corner with diamonds. Mixup normal basic and focus basic too. That being said, constantly choosing focus basic over basic is a fine way to make sure your opponent doesn't approach unless they really mean it. And unless they're very fast, they can't attack while they approach.

You should be careful to avoid putting your diamonds and waffles on top of or behind your opponent. The hitboxes will come out too late and you'll be left wide open. This is alright to do if you've got your opponent backing up in fear or ping is heckin' high.

Sometimes making walls gets boring or your opponent figures out how to deal with it. Sunny has another nice option. Lots of movement and lots of tap wides will create bullets that are easy to dodge, but also bullets that are easy for you to hang around and are moving at a lot of different angles. The large number of paths to Sunny's face is a tempting option for many characters (Wyrm, Storm, Sun), made more deadly because Sunny can how hide her face inside a hitbox. This is a more passive gameplan than the first. It's useful to switch to if you feel overwhelmed. Tap wides don't change your movespeed that much, and you don't need to think about where the wides/diamonds are going to end up; there's very little chance of them being able to take advantage of wides or diamonds without hitboxes.

While it's nice to take a break and focus on dodging, this is also a good mode for baiting out special moves in certain matchups (Frost, Depth). Since the mental load put on your opponent isn't as bursty, they're likely to become uncertain of an easy to dodge pattern and burn a defensive option. This means they can't use it to turn the momentum for themselves to overcome the crazy stuff you made earlier. You can switch back to gameplan I for however long it's off CD for, or try to pull of some Melee Bullshit.

Basic -> wide is very good. It's so good that it makes a character that everyone thought was weak up close absolutely insane up close. Sunburst is big, and tap wides have the centre of their hitbox on the edge of it. It's a real mean thing to dodge.

A nice melee rhythm is put one attack down, make sure you're safe, then put another down. If you're feeling risky do more attacks without thinking about dodging. Sunburst slows you down, so you'd better be sure you're in your opponent's deadzone before using it. If you're worried, use wide and pursue until you feel safe to lay on the real pressure. If you really wanna get in there, doing tap diamonds is good for catching approaching opponents off guard (assuming you aren't doing it all the time) and will get you in their face faster. Tap diamonds are also a good tool for getting away from melee pressure, just be careful about wides. They're also a good mixup if you've been doing a lot of waffles up close.

It might seem strange to be aggressive using your 15s (!!!) CD defensive option, and you'd be right! But it's pretty good against Depth, Lich and Sunny. Occasionally you can pull some jank and get Frost or Arc with it. Wyrm, Redhood and Storm don't give a shit. Redhood and Storm because they're too fast, Wyrm because she's too fast and her DS will fuck you up.

Basically, you wanna hit them with dispel so they get slowed down, and put some bullets down that will eventually hit them if they don't move. You want to time some wides and basics well enough to make them commit to a direction and then put some more hitboxes in the direction. When the dispel disappears and your opponent isn't invincble, they might get hit! There's a lot of nuance to this that I can't quite explain yet.

Dispel is Still a Defensive Special

It does a lot for you if you wanna leave a place. It slows your opponent down, it gives you hella i-frames and if you combine it with diamond dashing you pretty much get to choose your position on screen.

Use it liberally except against Wyrm and maybe Arc. For Wyrm, use it only when Wyrm is DSing you. For Arc, use it if you decide you don't wanna deal with ailments or getting clocked. (Sun wins the clocked trade istg)