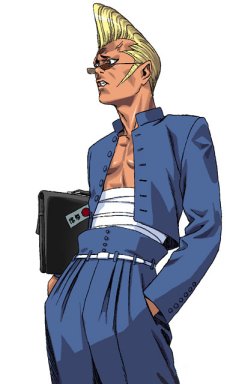 Buntaro is a schoolboy with his own gang, who cheers him on in fights. He is also the older brother to Shintaro Kuno and share similar techniques with slight differences. Although, Buntaro likes to pretend to be a tough guy, he is truthfully very emotional and tends to cry every time he feels moved. Especially when he is watching an emotional scene in an anime. Buntaro's in-game character design different from his character select portrait. Buntaro doesn't wear glasses, wears a bandana on his head and has a completely different hairstyle.

Buntaro is a very short-ranged character that lacks good grounded options. He has very good neutral options but lacks a good approach option for his grounded routes are very limited forcing him to use his jump normals to approach.

Buntaro's neutral play is excellent thanks to his 623.K. It's not air unblockable, but it does have start-up invincibility and beats out most jump-in attacks. If you have Stress Meter opt in to use his Stress Shot, 214-1236.D. It's air unblockable and does a solid chunk of damage. Buntaro's grounded options are seriously limited by how short his normals are. 2.B is going to be your best friend along with 7/9.B, 7/9.D, and 7/9.C. All three of these air normals can cross-up and 7/9.B chains into j.D, allowing for scary and damaging cross-ups. Buntaro also has access to an air 50/50 thanks to his j.236.K and two optional follow-ups. J.236.K > 236.D is a high to low and J.236.K > 236.B is a high to high combo. Use this sparingly for the B follow-up has an identifiable start-up. Buntaro has an easy time applying pressure and comboing. If you're 63214.K gets blocked (excluding level 0, it's minus) you can set-up a grab since it immediately puts you right in grab range. This is a nice option select if your 63214.K ever gets blocked.

Buntaro's leveling system isn't worth it past level 1. I can really only recommend that you charge once since the time it takes to get any more levels is way too difficult thanks to the stomp's long animation. DO NOT BOTHER LEVELING UP TO LEVEL 3!! For one, it takes 3 stomps to fully level. Your opponent can easily walk over and punish you during the stomps' animation. Your 63214.K at max level cannot be comboed into under any circumstances. The 63214.P counter gains extra hits per level, a total of 4 hits at max, and is very situational in use.