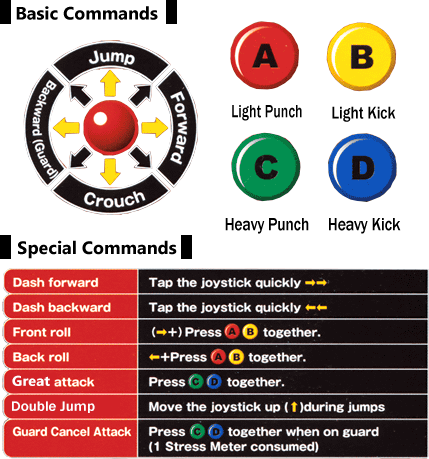 Run or Dash forward. Some characters have different movement options.

Can only be done after being knocked down.

Input 7,8 or 9 to jump again after another jump.

Input 1,2 or 3 while grounded then quickly 7,8 or 9 to jump higher than a normal jump

Input 1,2 or 3 then tap 7, 8 or 9 to perform a hyper hop. Hyper hops are quick horizontal hops that can be used to quickly get in on an opponet

Can also be done during Double Jumps

Calls the Kuroko out into the fight.

Return Kuroko - BC (Only when active)

Press BC again to return the Kuroko to the sidelines. This can only be done when the Kuroko is active.

When the Kuroko is behind you, pick him up and throw him at your opponent.

When the Kuroko is in front of you, pick him up and use him as a shield to absorb attacks.

Kuroko Projectile - C + D on hit with the Kuroko

Sends the Kuroko quickly at your opponent.

Launches the opponent to the wall with a hard knockdown.

Launches the opponent into the air.

Throws can only be done while close to the opponent and inputting 6 or 4 + C.

Jump and input 6 or 4 + C. Can be used to end combos for some characters.