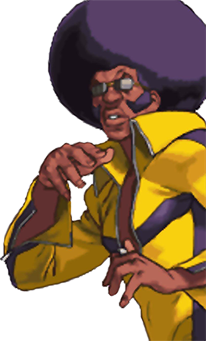 Jones is a rushdown style character with big normals, special attacks, and great attacks. Although he does lack a projectile, he can still get in with ease with his long 2b and 3b normals. Jones has a very easy time dealing big damage with unrecoverable health.

He can easily out poke most characters, confirm into big damage with his Stress Shot super and set-up unblockable setups with his Ippatsu Ougi super. Jones's 2b and 3b are his main tools for poking, combos, and pressure for they're extremely long. He can also end his block strings with Gaudi Punch to make them safe.