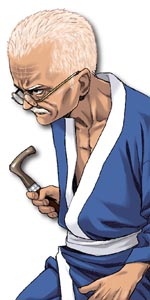 Kanji found out about the Matrimelee tournament through Kintaro Kokuin, who told him that many other relatives were invited to it. Kanji was surprised at not receiving an invitation and later found out the prize for the winner was to earn the hand of a young princess. Kanji wanted a bride and grew impatient as the tournament was approaching so he stole an invite from another fighter.

Use dash C > EX flash cane whenever your opponent is in a corner or you are about to get rage explosion. Jumping D (or jumping C if the opponent has long air pokes) for air-to-air. Can end pressure strings on 41236B/D pretty safely but some characters can punish it. If your opponent is throwing projectiles at you, your 63214.A will absorb most of them.