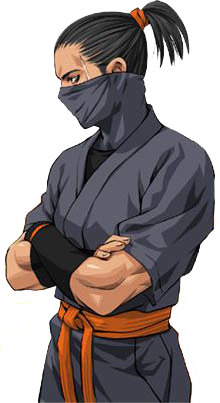 Saizo is a Hit N' Run style character who can play Keepaway and Rushdown effectively. With his fast run speed paired with a super jump, Saizo can stay out of the reach of many characters. Saizo also has decent zoning ability with his 214P and 236P projectiles. 214P is notably good for its large horizontal hitbox which can catch jumping opponents. He also has the ability to combo after his Ippatsu Ougi (1313D) if he hits it on the last hit, preventing the wall slam, allowing for extended combos with nice damage.

The tables are temporary.