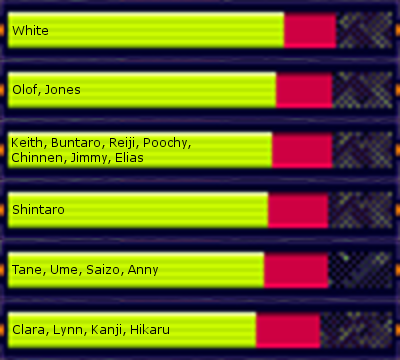 Characters all have a different amount of total health and can be separated into health tiers. The health values can be seen in the table below, and the image to the right is a visual representation showing their remaining amount of health after having the same combo done to each of them.

Health that can be recovered is displayed in red, and health that is permanently lost is transparent.

With some exceptions, most attacks that hit or cause chip damage will leave a portion of recoverable health, with about half of the total damage done being recoverable with the rest permanent.

There are two ways to regain recoverable health:

One other way recover health is using Elias's Special and Super Moves that restore his health on hit, but he also regains what would usually be permanently lost health.

There are a few ways of losing your potentially recoverable health.

Attacks that Leave no Recoverable Health

Certain attacks that cause wall slams prevent a Recovery Roll from being performed afterward, leaving no health to recover. These include but are not limited to:

It should be noted that not every wall slam from a Special or Super Move prevents Recovery Rolls, it is still possible to do so after some. Look at the character pages to see which.

While Anny's Super Move Cosmic Throw does not wall slam, it deals only permanent damage and leaves no recoverable health.

Guts is a damage scaling mechanic that reduces incoming attacks' damage by the amount of health you have. The less health you have, the less damage you take. All attacks, Special, Super, Great Attacks, etc. are all affected by the Guts mechanic.
Elias's Hell or Heaven & Maximum Delerium life absorbing attacks are also affected by Guts. Total life regen is reduced by the same percentage as damage reduced versus the opponent.

The Stress Meter is the Super Meter of Matrimelee, it is the two bars located at the bottom of the screen.

A maximum of 3 bars of Stress Meter can be held at a time, and every time a bar of Stress Meter is filled that character will automatically perform a Rage Explosion – the details of which can be seen below.

There are two ways of spending Stress Meter:

1. Using a Super Move, which includes:
2. Using a Guard Cancel.

There are multiple ways to gain meter:

Getting thrown does not give any meter, even when hit with a Command Throw. However a few Super Move Throws give meter.

The Rage Explosion is an automatic move that triggers when a bar of Stress Meter is filled. When activated the character will scream while a giant wave of energy surrounds them.

There are several different aspects to the Rage Explosion:

Offensively, the activation can be delayed by performing consecutive chained or canceled attacks if the bar of Stress Meter is gained while the opponent is in block stun. However, if a Rage Explosion is stored and a Super Move is used before it activates the Rage Explosion will be prevented from occurring.

It is possible to sneak in the Rage Explosion as a counter after a seemingly unsafe block-string by ending on a somewhat disadvantageous move, with the idea that when the opponent goes to punish they get hit with the Rage Explosion. In this situation if they do manage to hit you, the Rage Explosion will occur after whatever they punish you with ends and you're in your next neutral state.

Approaching An Opponent Who has a Rage Explosion Stored

When opponent has been knockdown with a Rage Explosion stored, the easiest way to deal with it is to get close to them and block the start up of the explosion. It only has a single potential hit so you'll have plenty of time to set something up after blocking it, or just simply go for the 1 frame low attack punish.

If you're not in position to block, you'll find yourself only being able to attack the moment the Rage Explosion ends, meaning it's a very small window with a good chance of accidentally getting hit by a still active explosion. The timing is difficult but it is possible to catch them with a long range low attack such as a sweep between the explosion ending and the opponent's invincibility end.

Comboing From the Rage Explosion

Due to the opponent being launched in the air in a jugglable-state when hit by the Rage Explosion it is possible to combo from it. It is easier to get them if they're hit later into the activation since you'll recover faster and have more time to act. The ability to take advantage of this and the strength of combo varies per character.

There are also a few Super Moves that can only be used while in the middle of a Rage Explosion.

There are a couple ways to intentionally delay a Rage Explosion:

The simplest action to take after setting up one of the options above is to jump. By holding up to continuously jump the Rage Explosion won't activate until you stop. Keep in mind that this does not work with hops.

There is a hidden guard mechanic in Matrimelee. Most attacks when blocked will do a a certain amount of Guard Damage to an unseen guard meter, and after enough of this damage is taken a Guard Crush will be inflicted, stunning the player leaving them unable to block and wide open for an attack.

Most attacks do some amount of Guard Damage, however Guard Cancels do none, and it varies depending on the Super Move. Check the individual character pages for more specific information.

Some characters can instantly Guard Crush with certain moves, but this is more for effect and they cannot capitalize on Guard Crush in situations.

Characters have different amounts of total Guard Damage they can take before being Guard Crushed. They can be separated into tiers as seen in the table below.

Also referred to simply as "Normals".

Normal Attacks are preformed by pressing one of 4 main buttons (A, B, C, and D) while standing, crouching, or jumping.

Additionally, under certain conditions the normal which comes out may change:

Every Normal Attack (including Command Normals, Dash Attacks, and Great Attacks) can be canceled into Special Moves and Super Moves.

Command Normals are a special type of Normal Attack that is done by holding a specific direction when pressing the button, with the direction held and button used varying between characters. Directions commonly held for Command Normals are Forward and Down-Forward (such as 6.D and 3.B). A few characters have command normals that can be preformed in the air.

Command Normals may have additional special attributes, such as hitting low or high, putting you into an aerial state, and even functioning as a counter.

Dash Attacks are performed with by dashing and pressing A or C for a Punch Dash Attack, or B or C for a Kick Dash Attack. You can only attack out of a Forward Dash.

Certain Special Moves are also "powered up" when performed from a Forward Dash and become a Dash Special Move. It is possible to combo into these from a Punch Dash Attack.

Also referred to as "Crush Attack".

Guard Cancels are also performed by pressing C+D but while blocking. Although they have a different animation they function similarly to Standing Great Attacks by wall slamming the opponent into an untechable knockdown. Refer to the Guard Cancel section for more information.

When an A or B attack is able to cancel into itself.

CPS1 Chains are a bug that lets you Self Chain A and B attacks into any other 5a/b/c/d or 2a/b/c/d attack. CPS1 chains in Matrimelee are very similar to how they're performed in SF2 games.

To perform a CPS1 chain, you must hit at least once with a Self Chaining A or B attack and after hit you must change your stand/crouching stance to the opposite and press A or B once more, plus whatever other attacks you want to chain into.

Normal versions of A and B attacks put the opponent into an air reset and you lose all juggle options. This does not apply to command normals used from A or B attacks.

IPS activates as soon as you do 10 individual attacks in a combo. If a move does 2 hits, generally it counts as one attack. So you can have a 30 hit combo before the 10 attack limit kicks in and the opponent recovers instantly.

Normal Throws are input with

C. The opponent will be thrown in the direction held.

It is not possible to throw a Recovery Roll, but regular Rolls can be thrown.

Teching Throws is performed the same way as a Normal Throw, by inputting

C when the opponent attempts to throw you.

It is possible to Tech Throws in almost any situation, even when you're in the middle of another move. The only time Throw Teching is not possible is during a Roll.

After a successful Throw Tech both players are left extremely close to one another – going for another throw in situation can be effective. In the corner this situation is amplified as the characters are even closer together. Multiple Throw Techs in a row in a corner situation is common.

There are a few quirks when it comes to air throws:

It is possible to combo into Command Throws.

They have a whiff animation unlike regular throws.

Need to do some additional research:

Tane has the unique ability to Crouch Walk forward by holding

to continue to run.
Run or Dash forward. Some characters have different movement options.

+ AB Can only be done after being knocked down.

Input 1,2 or 3 while grounded then quickly 7,8 or 9 to jump higher than a normal jump

Input 1,2 or 3 then tap 7, 8 or 9 to perform a hyper hop. Hyper hops are quick horizontal hops that can be used to quickly get in on an opponet

Can also be done during Double Jumps

Input 7,8 or 9 to jump again after another jump.

The Kuroko does not appear on every stage.

You are given 60 real-time seconds to complete each match. Some feel the default speed is too fast since time-outs can be a regular occurrence.