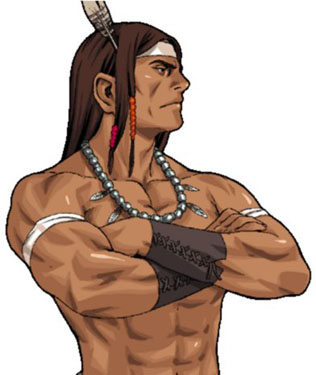 White Buffalo is a pure-hearted man who appreciates the little things in life. He does not speak much, so people write him off as serious and stoic. But, in reality, he is naive and clumsy which is why he prefers not to speak much. White is also an avid collector of shiny and interesting objects such as jewelry, shiny objects, wooden carvings, etc. White entered the Matrimelee tournament in hopes of earning a bride and adding new objects to his collection.

White is a very hard-hitting defensive charge character. Although he hits like a train, he moves like a turtle thanks to his super slow walk and run speed. White does have the highest health out of the cast and highest raw normal damage.

White is not the best character. He has extremely slow walk/run speed and slow move recovery. In order to make up for his extremely slow speed, he has to play extremely smart and calculate the risk of approaching.

Approaching an opponent with White is extremely difficult due to his slow speed. But, White can get in with his 9.D. White's 9.D has an extremely large hitbox and can cross-up. For a grounded approach, using 2.A or 2.B is your best and safest option. You can cancel both normals into light Tackle Blow, which Hard Wall Slams and can give access to a cross-up attempt. White can also use light Buffalo Storm and follow the projectile. Forcing them to block, jump or roll the Buffalo projectile. This sets up a grab, an anti-air juggle, or even a cross-up. Once you do manage to approach and hit the opponent it is crucial that you know White's combo options and routes so you can capitalize on his big damage and take the life lead. You will have to be very careful if your opponent blocks White's attacks he is VERY MINUS on block for all special attacks and supers.

White's Heavy Buffalo Storm is excellent for playing defensively. You can hold it and release it whenever you want. Both versions of Buffalo Storm have a great anti-air kick that is active upon releasing the special. White's level 1 Stress Shot is also excellent at catching jump-ins due to it being air unblockable. White's Stress Shot is also a projectile, so if White ever gets hit it'll trade for big counter hit damage. However, the level 1 is extremely unsafe on whiff and block. It's an easy punish for those who are patient so use it sparingly. White also has a great Standing CD, or great attack. It's extremely fast, causes a hard wall slam, and is special cancelable. Use his standing Great Attack to check unsafe approaches.

White is a very heavy hitter with simple combos. But, he's super slow, very unsafe on block, and lacks solid approach options; if your opponent doesn't know the matchup it'll be easy. If they do, expect a difficult time winning.