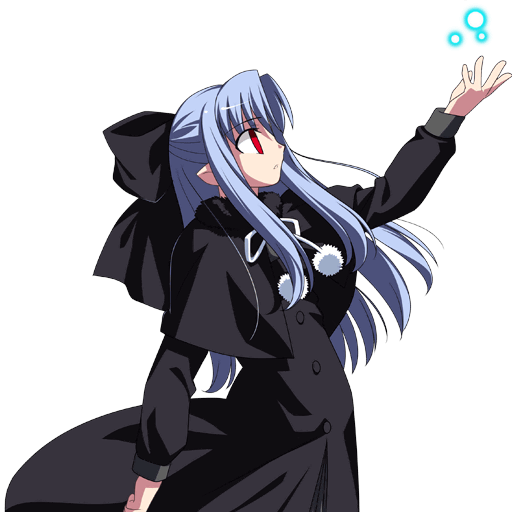 Len is often mistaken for a Succubus Demon Familiar. In fact, she is a Dream Familiar with the ability to manipulate dreams.

This is one of the better characters better at neutral zoning, with a set of strong air normals and a smaller hit box. Also, with the ability to air throw in the direction of your choice now, her pressure, okizeme, and damage game have been slightly improved.

An interesting version of Len with a slow projectile and reflectors. F-Len loses good neutral zoning (e.g. j.236 ice series and 214 cats) other Lens have in exchange for better normals and strong reflector setups post-knockdown. No EX Ice means no EX Ice loops, but her simple combos still deal decent damage. If you manage to use reflector(s) in a combo, your damage output becomes very high. This, however, can be difficult and requires constant awareness of your surroundings and ability to control space.

Finger orb flick. Generic full moon 5A with +frames. Chains into self. The biggest difference from other moons would be that it is only one hit. It's range is OK but don't expect too much from it as an anti-air or a poke.

Paw orb flick. Again, pretty generic spammable full moon 2A. The attack itself is very similar to 5A (except lower), but Len is in her cat form for 2A and thus harder to hit.

Long range orb throw that angles upward. Ideal ground poke and occasional anti-air. Its range is longer than what most people think, so use it to your heart's content. Just be aware that your other normals may not be able reach as far, so be careful when comboing at max range. 2B may be the best choice as followup if you hit with 5B at long distance.

Extend-o-cat kick. Much like other Len variations, 2B is F-Len's only low. But unlike other Lens, F-Len's 2B has quite a long range, almost as good as 5B. Try to avoid using this in combos, however, due to its proration. Trips on hit.

An uppercut launcher with an orb... well supposed to be one at least. Due to full moon combo system, using this to finish your groundstring means no 5C. Sure, you could do a combo with this but the damage you get will be pretty bad. Could be used as a close-range anti-air but unreliable.

The same old 5 hit orb swirls that can be canceled at any point. Main source of Len's damage in full moon because there is a meterless launcher that will connect after all 5 hits. Somewhat decent anti-air that can cross-up against people in air.

Len pops out of cat Len and does a pounce. Actual Len is still at wherever she was before the move. 2C Trips the opponent, but you can't combo off of this because it does not cancel into specials or a jump (in fact, it only cancels into 3C). The only time you might use this is during blockstrings as a surprise when people become used to seeing 3C.

Same as 2C except Len appears where the actual Len landed (that is Len moves forward). Unlike 2C, this CAN be canceled into specials. For this reason, this is your main trip and the first part of BnB launcher. Also, very useful for blockstrings because you move forward. Just remember to cancel 3C with a 236 ice ball for safety.

The BnB of choice in most situation. Try to let 5C hit as many times as possible. Depending on how and where you started, 5C could hit 4 or 5 times.

5C may whiff after 5B, when 5B hit near its max range. Less damage, but better then dropping combos. 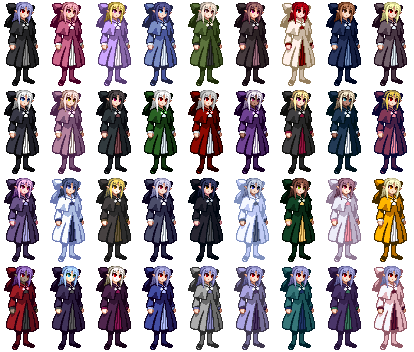