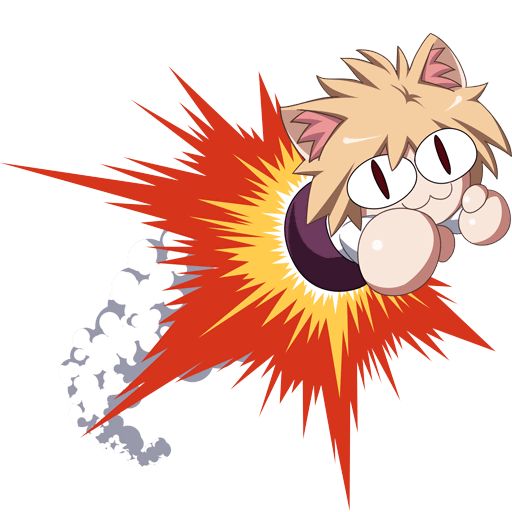 Neco Arc is a running TYPE-MOON joke that has been going since Tsukihime, and is a lolcat version of Arcueid Brunestud. It's hinted that she may have been created by Kishua Zelretch Schweinorg, which proves that the man at least has a sense of humor.

Neco Arc is commonly viewed as a joke character by the Melty Blood Community. Her movement, size, range and aesthetic are vastly different to other characters, which makes her irritating to fight against and for this reason she is generally disliked. Some players do attempt to take her seriously and she has placed highly in a few stray tournaments, but these players are a somewhat rare breed. Neco Arc does have some interesting tools that she can use to win, but in the end it all seems to come down to just how much you can try the opponent's patience.

22B: Throws up a Neco Arc, which does something useless, including:

421A: Calls some Neco Arcs, to do even more useless things, such as:

Arc Drive: Same as Arc's, only the chain is made of cats.


This will be enough to take care of almost every single hit you get that can be hitconfirmed into a combo.

It's not trivial, but it's one of the easier fuzzy guards to nail consistently. It also works on many of the mid height characters.


If you can still do combos and basic pressure and mixups while in the Dizzy state (which reverses your inputs) you can usually get a free combo after this as your opponent will have poor reactions as they need to compensate for the switched inputs.

Don't ever do this, don't ever play this character.