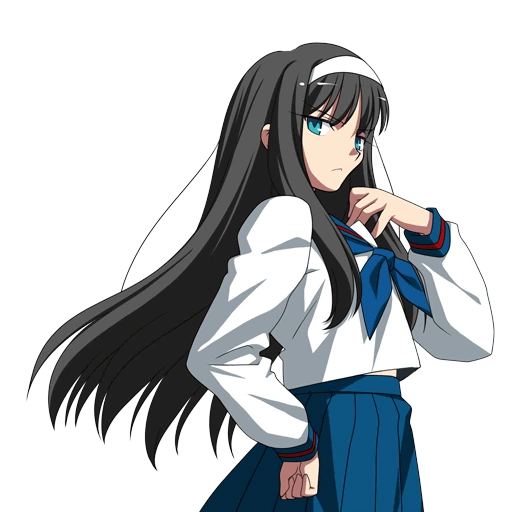 HSei is the most rushdown oriented of the Seifukus, with a strong emphasis on pressure and combos. She loses most of the zoning utility that CSei’s kit has, opting to focus more on her strong normals and good movement to score a hit and carry the opponent into the corner, where she can work her pressure. Notably, she has one of the most plus on block raw normals in the game, with her 5A being +6, a frame advantage even most F-Moons would be envious of. Combine this with her strong command grab and forward moving normals and you get some of the most brutal corner pressure Melty has to offer.

HSei is typically aiming to score one hit in neutral, which she can use to carry the opponent into the corner and start her pressure. She mainly wants to use her j.A to fish for a counterhit, and use it to take the opponent to the corner. Her pressure is where she really shines, where she can play a scary strike throw game with her command grab and plus frames, which will loop back into itself when she gets a hit.

You'll want to turn any hit in neutral into corner carry, which is pretty easy with her great confirming ability. In the air, j.A is your best air to air and can easily snipe people slightly above you. It's safe to whiff just like most melty j.As, and if you see the opponent is vulnerable after you've done rising j.A, that's when you'll want to airdash in. If you intercept the opponent in the air, you should do j.AAC and react accordingly with dj.[C] if it connects. This allows you to confirm non counterhit j.As into a full combo.

On the ground, abuse your dash to snipe landings, or dash under air approaches with the low profile. It can travel full screen distances quickly with the great acceleration, but keep in mind it's weaker at closer ranges due to the somewhat long startup. 2B is your best option for a poke or counterpoke, with a quick startup, good low profile and long range. It's easily confirmable into 5C at most ranges, although at the very tip of 2B, doing 2B 5C will cause the first hit of 5C to whiff, so adjust your timing accordingly. 2B is very prone to being airdashed over and punished, so in those cases 5B is a good option for a poke as well. It has a lot shorter recovery than 2B, which can save you in a lot of situations, albeit at the cost of range. 5C is also a good option due to it's size. 6B does well at sniping people out of the air, and has good range, making it a good poke to throw out if you wish to cover multiple options. It is quite prone to being low profiled at longer ranges, however.

Finally, j.214X has some use in neutral for catching people extending large hurtboxes. It's jump cancellable on whiff, but even this is painfully slow, so it should be used sparingly and at long range where the opponent cannot punish you for it. Best used against characters with poor movement or range.

HSei possesses a very strong but linear pressure game. She mainly wants to use the frame advantage on two things, 22B and 5A, both of which are +6, to keep her turn and keep looping her offense. After she conditions them not to mash, she can use her strong command throw to punish them for blocking and keep them guessing.

This is how your pressure will be structured for the most part. You will simply slot in different moves for different purposes, for example using 5A midscreen instead of 22B. Lets look individually at the moves that are most useful for pressure.

5A- One of your two main pressure resets, +6 on block and also a low. Very hard to contest without simply guessing what she will do after she's plus. The main downsides of this are the lack of range (it's minus when it whiffs) and that it can quickly rack up rebeat penalty, which will hurt your damage.

22B- Your other main pressure reset, which is ALSO +6 on block and ALSO a low. Best used in the corner, where it will not push you back at all, making it amazing for setting up command throws. You'll want to cancel higher blockstun normals into this, so that it leaves as small of a gap as possible. If the opponent shows they can deal with this, you'll want to mix up what normals you cancel into this. 5C will be your go-to for the best forward movement, but make sure to keep it varied.

5C- Most important normal for moving yourself forwards. Important to keep in mind is the difference between 5C(1) and 5C, as the two hits have different properties when cancelled. The first hit will move you forwards the most, but has poor frame advantage, while the second hit moves you forwards less but has better blockstun. What this means is 5C(1) is better for cancelling into 5A or 6C, while 5C is best for doing 22B. Of course, if you're willing to risk it, 5C(1) 22B will push you massively forwards while leaving a rather large gap.

5B/2B- Used for resetting after you are plus from 5A or 22B. Make sure to swap which move you use to catch people trying to shield.

624C- Command throw that nets a full combo on hit, used in place of 5B or 2B to catch the opponent blocking. Useful for making sure the opponent doesn't just block all day.

623B- Niche special that is +3 on block and nets a good corner combo on hit. Mostly used as a hard callout for opponents shielding 22B.

5A6AA- +3 on block, but pushes you out massively on the last hit. Best used for safely ending pressure while also throwing out one last frametrap.

Okizeme setups after her two most common enders. You're aiming to hit to make the pillar hit meaty, which will grant you really good frame advantage for starting your pressure. If you make sure to block while the pillar is going off, then you'll be safe from most reversals. If the pillar is going off screen, you can change the timing or do dj.8[C] as an ender to ensure proper spacing.

Being a H-Moon character, your defensive options are naturally quite limited, and her toolkit doesn't offer many other options. The one saving grace is that her abare options are quite good.

623C- Not a very good reversal. Metered, horribly punishable on block, and it doesn't even have throw invul so it'll lose to those. It's quite active at the very least, and your only true reversal, but the meter would better be spent on bunker.

214D- H-Moon trademark defensive option, and the main way you'll be getting out of pressure. Scores a hard knockdown when done out of blockstun, but costs 100 meter. This is what you'll mostly be saving your meter for, if not heat. Best used if you are in the corner, since you'll be able to steal it back from the opponent, and leave them in a poor situation.

Abare- Her main options for this include 2A, an average 4f 2A that can cancel into itself for mashing. Good for calling out smaller gaps in pressure. She also has 2B, which is a very fast and disjointed low poke with large recovery. Great for mashing out of pressure, but use with caution. Finally she has 5C, which is a frame 10 move that's good at longer ranges.

Note: These combos can be found in the combo tutorial linked at the bottom of this page in additional resources, alongside some others. For more advanced combos, visit the combo document also at the top.

This page was edited by Whisk#5389 on discord. Please message me there if you have any questions or concerns.