This is the most “interactive” V.Akiha available, your goal is to achieve a good hit to do a full corner carry combo, straight into Momiji loops, and run your okizeme, all while managing your meter, since you are an H-Moon character, fortunately, this character doesn't have a lot of problems with that.

H-Vaki's neutral is nowhere near bad, but you can't play a lame game as well as C/F-Vaki. Opponents won't struggle as much since you are entirely reliant on your mobility and air buttons to play the game, and while these are very good, you will always have to be very careful, since you are made of paper and you don't have the best defensive options.

While in the ground, you are not as strong obviously, but you still have okay tools to play around, like a fast dash, and a button like 4C, it's excellent for poking thanks to it's massive disjoint, just be careful to not whiff it. If you are not too far away, you can get a combo out of a single hit 4C if you rebeat into 6AAA.

In terms of anti-airs, you don't have the best options, 5A is a bit lower to the ground so i would suggest only using it in emergency cases. Your best Anti-Air options is 623A, it doesn't give a lot of reward on regular hit, but you are fast enough to dash and put a button in your opponent's wake up.

While in the corner, pressure is Ok, it will be mostly based around Standard stagger pressure, with some frametraps, and IAD resets.

These are just basic examples to get started, after that, you gotta be a bit creative, since you don't have particularly good ways to extend your pressure. As you play, you will find situations to use 6AAA series in your offense, and once you condition your opponents to block more often, you can start throwing. 5C, 2C, and 4C are mostly reserved to be able to confirm into a combo once you get a hit.

The only recommended special to use in pressure is 214A/B, the pillars, uncharged versions are 0 on block when they block the 3 hits, while charged versions can give you a guaranteed reset pressure reset, but these have slow startup.

Inevitably, you will be in these situations, and unfortunately you don't have the best options to play a defensive game, specially with very little health.

623C is your only reversal, but it's not that good, easily shielded post super flash, so if you have meter, you should just try to do H-Bunker.

If you don't have meter, then just block, your Automatic shield counter can sometimes work but you will get punished hard against opponents who know to OS.

Mashing is always an option, but you have to know when to do it. 4C can be a particularly good button for abare, but you need to be a bit further away from your opponent.

The less risky option when you don't want to block is to simply find a gap to jump, your fast air dashes can guarantee you a reset to neutral. 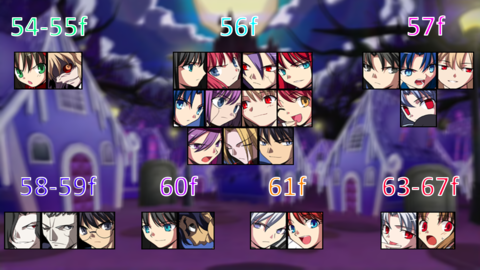 623B puts opponents head first, here are the wake up timings for reference.

For the ones that wake up faster, you can do IAD > j.22A, the lower to the ground possible, but you will gotta change up your timings the more it takes for the character to wake up, for example, against Roa, instead of doing IAD > j.22A, you simply do Forward jump > j.22A, once again, do it as low to the ground as you can.

TK j.236A is an alternative to the pit, a bit rare to use, but if will prevent your opponent from waking up with shield or bunker, as it is unshieldable, just note that it's not as plus, so if they block it, you will have more limited options than if you were to do j.22A.

Outside of midscreen, you should always do a corner carry combo in order to properly run your setplay and pressure, never go into the air combo unless more damage is needed to finish a round, or if you catch a jump and you have no choice but to go for an AT ender.

Corner carry with this character can be achieved with 6C after 6AAA, pretty simple, but if you want more damage, it has to get a little more complicated than that.

For the Momiji loops, you need to know about a few sequences: