The overall worst character in the game. He’s a joke version of Nero and while he appears to possess Nero’s moves, they all contain huge hurtboxes on start-up, terrible proration, and low base damage. If he gets a clean hit (good luck) it’ll hurt, but his confirms generally yield low damage. He also has the 2nd lowest health in the game, only having higher health than V.Akiha, even worse since he has weak reversals and no real strengths other than being small. He can backdash cancel certain moves and his general gameplay usually ends up being timer scam.

Stage: NECO no you may. 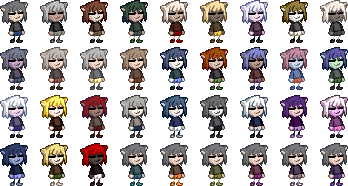