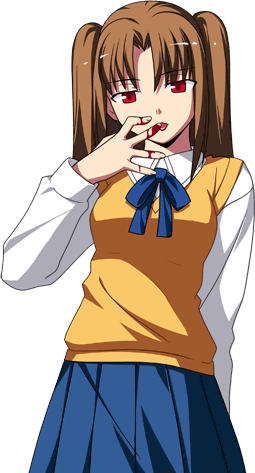 H-Satsuki trades the vortex-focused playstyle of C and F for a straightforward, well-rounded rushdown game.

H-Satsuki's blockstring game is pretty strong, and you can force people to block for a long time with a basic understanding of rebeat pressure and her specific moves that are good for it. Her 5C is a good move to charge up often as it charges quite quickly, 2C is also a good move to charge up due to massive blockstun, guard damage, and frame advantage; but should be done more sparingly because of the much longer startup. Generally you will be starting your blockstrings with 5B from any range other than point blank, and 2A or possibly 5A if you are in their face.

From neutral generally you want to go for a... 5B for forward momentum and decent pressure reset. 2C because it's faster and will stuff almost all pokes at a bit of a distance. 22B if you are spaced out a bit for catching jumps (buffer 623 and press C on reaction to jumps and to hit confirm). Or alternatively IAD or regular jump 9 and go for a jump attack. If you aren't pushed back too far, dash EX Bite can be a really strong tool.

The most important things to be paying attention to (other than your opponent), is whether or not you've used your 2A/5A for rebeats, so that you don't hit the wrong button, or try to rebeat when it's not possible. If you've already used both your 2A and 5A just make sure to end with 22A or something else safe.

Resets to neutral and builds respect that you'll want when going for rebeats.

Normally you want to rebeat after either 5C or 2C, mix it up.

6A6EE is an option select that beats shield bunkering, learning the timing to stagger it as much as possible is very useful as well. The last hit of 5A6AA is neutral on block but it has a lot of pushback, so you should probably cancel into 22A until you get some respect, then you can sneak in some other stuff.

5A6A forward momentum is pretty useful, but the second hit is terrible on block so you should always be canceling it into something else.

Any B button cancelled into 5[C] is a natural frametrap. 2B into 5[C] in particular is a very strong option because a CH 5[C] yields a disgustingly high reward if you convert properly. Counterhitting people with this will discourage them from challenging resets after 2B, which is +1 on block, and even if they block 5[C] when you do go for it, it's 0 on block so you can still try to reset.

Keep in mind that H-Satsuki has a slightly different air backdash than the other moon styles, which changes the effectiveness of her various mixups. Primarily, since it's a bit slower, but has an upwards hop like movement, the crossup IABD mixup is a lot easier to see, however you can also use air dodge for that mixup. In addition to this, when backdashing over people's heads, you are able to do so lower to the ground, even if they are standing.

Satsuki's primary corner 3.5-way gimmicks come from 623C when the opponent is just outside of the corner. The best setup for this is (etc) > 623B, OTG > 623C. You can't get that setup without 200% meter unless you confirm into a 5A6AA combo or some other situational combo that can lead to 623B. Another more basic setup off a regular chain that still works is just 3C > ASAP cancel 623C. Satsuki's mixups can go several ways, but they're only a true 2 way at best, and only in the corner. Simply autopiloting them probably won't get you very far against anyone capable of reacting decently so try to get in their head with your variety of options.

The initial setup for midscreen is a lot easier than the corner setups. So long as you end with a 623C you're good to go. Remember from before that the 3C > 214A > j.BC, land 623C is a really good combo extender for midscreen so that you maintain both damage and oki. If you didn't already know about it, drifting is done by holding 4 or 6 in mid air after a neutral jump or double jump.

The mixups listed below are just the generic stuff that goes as many ways as possible. You probably want to base your oki off these, but don't forget there is always all sorts of other tricks available to you like j.C wiffs or j.[C] fakeouts.

Here's the basic mixup you should be going for most the time midscreen:

Nero and Wara specific. [9] is to avoid dsj; slight pause is to make the j.b confirm into combo.

As an H moon character your defensive options are quite limited however, you are not just any H-moon character you are H- Satsuki and she comes along with her own set of good tools to get you out of sticky situations.

First and foremost, H-moon bunker(214D during blockstun) is what you will be doing to just avoid dealing with pressure, it uses up 100 meter to do an unavoidable (unless they were baiting) hard knockdown that can allow you to turn the tide of battle. An important thing to note about H-214D is that if it lands as a counter hit, it gives you enough time to set up a mixup equivalent to what you would get off 623C

While not as powerful as C-Satsuki’s it functions similarly and gets the job done. Keep people out of your direct airspace by throwing this out as a very powerful anti-air that you can easily combo off of. Not to mention its incredibly fast startup of 4f and you have a great mashing tool in your hands

If you find yourself in a situation where you are uncomfortable trying to 5A mash then do this. It has the same startup but noticeably less range.

Insane mashing button, use it whenever you know they are gonna try to dash reset or go for some gimmick, it is also fantastic at winning the post throw-tech scramble as there are no moves fast or long enough to contest. Incredible range and an even scarier startup at 5f!!! Remember that this move only knocks them down on the second hit, however you can confirm off 2C(1) with 236A. While 2C is incredible powerful it is easily beaten by IAD’s and with its recovery you are certain to eat a fat combo after they go over it.

Ah H-Moon Shield, it has its uses although very few. Mostly used for when you have a hard read on something especially if it’s something that your buttons can’t really deal with too effectively (Len j.2C, Nero j.B, Satsuki j.C etc.). Fortunately for such a high risk move the reward is actually pretty good depending on the conversion you do, going into your basic bnb won’t net you much but converting into j.[C] j.[C] can do over 3k and can give you full screen corner carry or 623C mix depending on the situation.

Used for if you know a low is coming. Off of a normal hit you can go for a 214A > air bnb routes or 623C routes if you're willing to spend the meter. It's real strength is in the CH confirms. On CH you can link into 2C and go for a very damaging combo (4k+) so the high risk might sometimes be worth it.

Has some i-frames at the start making it good for when people throw out single projectiles or buttons with long recovery other than that the move doesn’t have much use.

Your only actual reversal that is good but not great. You will mostly be doing this move when they meaty or if there is a gap in their pressure. It is AUB though it’s vertical range is quite poor, it is safe on block only being -2 so you can try to win the scramble that will ensue after it gets blocked, if it gets blocked, since this move is prone to being shielded since the super flash can act as a reaction test for pressing 5D depending on your opponent. Be careful with this move, it’s good but it’s not that good.

If you know your opponent likes to jump reset during pressure and their jump-in beats 5A and you don’t wanna risk messing up 5D then go for it, snatch your opponent out of the air and take your turn back. Do keep in mind that this move is not invul nor is it out immediately so you can be hit out of it on startup if they are close.