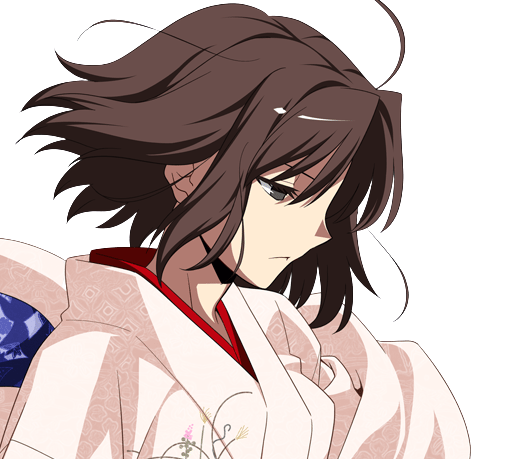 This page is still a work in progress renovation-wise, consider joining as an editor to help expand it. Please update this character's roadmap page when one of the editing goals have been reached.

Note: C-Ryougi has two moves where she throws her knife and takes out a second knife. She must retrieve the thrown knife from the ground (with 22A/B/C) before she can throw it again.

C Ryougi is generally considered the worst of the three moons, due to her mostly gimmicky pressure and smaller buttons compared to the other moons. That being said, she gains a few notable things over said moons: An invincible reversal in the form of Heat on demand, which also increases her survivability when able to heal red health. She also gains an actual jump in button in the form of jB, which is also an incredible button that is used very liberally. C Ryougi wants to use her fast movement and great air buttons to confirm hits and keep you on the ground.

Mostly being precise with j.B and 5B.
Use your quick airdashes to get in or retreat.
Retreating is important for C-Ryougi, as it sets up her quick airdash to get in when the moment presents itself.

C-Ryougi has mediocre pressure and usually ends up giving up on it and falling back to neutral, unless you want to take some risk.
Example blockstring: ...5B > 2C > 5A(whiff) > 5B > 2C... Cancelling into an A normal from 5C is +1, and +2 on 2C. 5BB is -1. If you want to take risks, you should go for rekka high/low (236A>214A/214D), frame traps(half charge 5C or 6C), unblockables (use 5C or 6C the others are too slow), or the 421 series for a crossup overhead (preferably B because that one is jump cancellable so you won't die on block) Should you get a hard knockdown through A rekka, 214B, or 421B, you can time safejump with j.B or, should you be feeling frisky, use 623[A]/[B] as a meaty. Because these moves are unblockable and provide untechable knockdown, they're a good choice should you be fighting an opponent without a meterless reversal, or without meter for said reversal. Possible to be jumped out of should the meaty not be tight enough. Let's be honest, maybe it doesn't have the best pressure, but it exists and it's risky.

You have 5 unblockable moves. They are generally weak, but work well vs F-Moon opponents, because they don't have the option to dodge.
Since they cannot dodge, they are forced to shield it, or use some kind of reversal. They usually shield it, as it is easier.
You cannot combo from hitting an unblockable.

One big note about unblockables is that they do big amounts of red hp damage.

So consider opponents red hp gauge and if you want to clear it.

C-Ryougi has a unique 421 series that crosses up and hits overhead. The monke flip.
This move pretty good as it can be cancelled from normals, and is not easy to punish.

Doesn't work on Aoko, Tohno, All Akihas, and Kohaku. Always out of the corner.
Always crosses up on Kouma, Miyako, Len, WLen. Can still be used as a knowledge check.

Works on rest of the characters, however the delay varies to get crossup or not per character.
The lower the opponent(more delay) before 236C, the bigger the odds that they will be pulled out of the corner.

Here are some of her okizeme routes from her TKj.236B routes in the corner:

This route uses meter but gives full you plenty of time to set up a 50/50 in or out of the corner. The hard part is watching the height as some characters float too high and go over Ryougi, so you need to delay your link of the TKj.236B and the 5BB. Do note that the 2C can change which side the opponent is on so be sure to watch carefully, you should be able to control it if you watch your links and their height.

Does not use meter nor grants a 50/50 but it is her one of her more damaging corner enders without meter. Due to ending in the 236A rekka ender she can super jump after to safe jump. Be wary of the height and timing as the second 2A can whiff sometimes. If the 2A(w) > 2A is too hard feel free to just do 2A into rekka.

No invincibility on start up but it gains some soon after so it can be used against certain set ups in pressure to reset back to neutral. If it is shielded it's fine, it can be canceled with jump so you can air block or air dash back to get away. Because it does cross up it does get you out of the corner which can be life saving in some match ups, also the angle it hits at makes it tough to duck under.

Similar to 421C but it has invincibility on start up, but not for very long(frames 1 to 3). Even if shielded you are still able to jump cancel it adding some extra safety. The hitbox is very high and will not hit crouching characters, so if they meaty with a low, long range move you're probably getting punished as their move will recover in time. Can be used to break out similar to 421C as the invincibility on start up is always appreciated.

A rarer but situational reversal option. Due to being a TK input it takes 3 frames minimum before invincibility will activate, and the TK motion can be hard to squeeze out in tight blockstrings, but it is a quick option that is only about -6 with decent push back so not the worst option. It can also be used as a panic option to get someone off of you in the air if they are going to land before you, but do know that while you are strike invincible you are not throw invincible and after the flash you can be gAT out of it still.

NOTE1: In most of these combos, j236B ender can (and usually should) be swapped for an airthrow to gain oki at the cost of damage. Use 236B should you feel more damage is needed to finish off an opponent.

NOTE2: Starting a combo with 2B > 5B > 5C usually will improve his damage quite nicely.

NOTE3: Many times they may not respect the airthrow they may jump or do something else, if you notice that go for damage or use J.22C to get okizeme

The J.22C is a very good pre ender to continue the pressure after a combo.