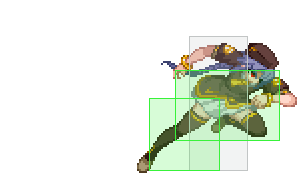 Unlike her other moons, F-V.Sion has a stepdash that travels a set distance and cannot be stopped, and a subsequent command dash (6AB only, not 66) that looks really cool.
Playstyle

FVS thrives on being unhittable. Abusing the momentum gained by dashjumping is necessary in making your evasive capabilities better. Dash under air approaches to keep opponents on their toes and punish their landing. Despite her laggy dash, FVS is still very fast; keep this in mind when playing against characters with summons or laggy neutral tools (Aoko orbs, Len cats, Nero summons, C-Roa orbs, etc.) so you can scout the best opportunity to (command) dash in their face and punish. Keep your air-to-air presence scary by scouting air approaches with 7j.A/C, IAD back j.C, or rising j.C. Air counter hit j.C is some of FVS' best damage, so use j.C liberally. J.A is also strong for boxing out opponents extending hurtboxes in the air. 22X buffer jump is a great option for disrupting setplay, as you can jump over active hitboxes on the ground (Nero snake, etc.). 214C is also great at this, sporting long range and instantly turning the tables on hit.

j.A and j.C are your best friends. Neutral/rising jump j.A is good for stuffing air approaches due to its massive horizontal hitbox and fast startup, not to mention you can do two in a single neutral jump. j.C's vertical hitbox is excellent and will beat most air normals when below the opponent. On the ground, dash 2B and 5B/5[B] are great for checking grounded opponents and are easy to confirm off of. 214[B] whiff cancel into 214C can cover a considerable distance and can whiff punish from nearly full screen. 6[B] is massive, disjointed, and is whiff cancellable as well, so cancel into 623C if you get jumped in on during the active frames.

FVS has good plus frames on her normals. 2A stagger is strong, but a little less effective than other Full Moon characters due to her inactionable dash. 5B is +3 and frametraps into 2A easily point blank. 5[C] is another standoutat +4. 214[B] is jump cancelable on block, allowing for all kinds of mix, like IAD j.BC for a double overhead, j.2B, whiffed j.2B, empty hop throw/low; the possibilities are endless. However, 214[B] is very easy to shield, so buffer 7 after connecting on an opponent's shield to block the shield counter (EX Shield -> 5A will likely hit you though since it is air unblockable). 6[C] is good for catching jump outs and occasionally for stealing back a turn, but again, is easily shieldable. 214A is plus at max distance, so space with 2B pushback to gain maximum frame advantage. Midscreen, to keep the opponent respectful of your pressure, end strings in 22A/B/C (depending on distance) to catch potential jump outs or aggressive action. Buffer jump after every 22x to combo afterward on hit.

FVS' oki is pretty lackluster compared to other characters, but still isn't bad.Post airthrow, F-V.Sion gets nothing midscreen, but you can airdash after to gain some screen presence. FVS air throw becomes far more potent in the corner. She can j.2B in order to meaty neutral or back tech, and can whiff cancel airthrow recovery with a jump normal to chase forward tech. If the opponent doesn't tech, then F-V.Sion gets real oki. 5B is an excellent meaty with high reward on counterhit (it can also combo into itself on CH point blank) and is +3. Combos ending in 236A set up a safejump with cross up potential midscreen. 623C gives an air drift mixup midscreen, but can give a left/right mix in the corner with proper routing.

Please block. But other than that, FVS has a ton of defensive tools. Her 2A abare is strong, and she has two excellent reversal options for different uses. 623C provides a hard knockdown, side switch (if you want to), L/R mix, and vaccuums insanely well. 214C provides instant corner carry and a safejump, and is difficult to punish at max distance. Generally, EX guard often and exploit large gaps in pressure (charge moves, summons, etc.) by using 214C on reaction. If FVS has meter, her defense is very good.

Some of the combos are taken and translated from the French wiki BasGrosPoing. See here for the original.

214A 214B Link: You can link 214A into 214B for extra damage. You want to aim to hit 214A in its final active frames and cancel the recovery frames into 214B. Generally, the link is easier and more stable when done after 3 hits of 2A. Once you get used to doing it, you can gauge the distance pretty easily. It is also easier to do after j.BC double overhead, so keep that in mind.