Stop! Read me first!
The tier lists on this page are subjective in nature, and are the products of their individual authors. You can only trust a tier list as much as you trust its author.
Tier lists reflect the understanding on relative character strength at the time that they are written. Metas can develop and characters can change after a tier list is made.
Tier lists usually do not account for character difficulty, but that can sometimes be a factor depending on the author.
Depending on your goals and how competitive you are, tier lists may or may not be entirely irrelevant.

Alps is a top-level

F-Nanaya as secondaries, as well as having experience playing a variety of other characters.

This tier list is from September 2022 and ordered within tiers. According to Alps, this tier list is made specifically for PC Melty, and prioritizes matchup spread over individual character strengths while still considering both. An opinion formed around Ringwide play would look a little different in terms of placements within tiers, but not drastically so.

His tiers are defined in more complexity here:

S+ Tier: Straight up best in the game. Broken.

S Tier: Also best in the game, but a slight cut below. Still comparable, still broken.

A+ Tier: Definitely able to compete at the highest level. Despite not being as outright ignorant, their fantastic reward and toolsets make them viable without question.

A Tier: Comparable to A+, but falls behind a noticeable degree in terms of generating advantage, or capitalizing on it.

A- Tier: Solid potential, and overall matchup spread. Strong capacity to deny interaction while playing their game, but cannot avoid working with exploitable commitments as opposed to around (unlike every character above this tier).

B+ Tier: Cutoff point. In surprising contrast to their functionality, characters starting here are dubious when it comes to winning the truest high level meta of the game. This tier is strong enough to keep up with A+, but struggles to compete against S and S+. Due to the significant difference in performance quality, there are seldom any winning matchups. With very little exception, most are even or near-even at best. Even so, it should be maintained that these characters still have very real advantages in their own right.

B Tier: Same as B+, except they slightly fall behind on either versatility or well-roundedness.

B- Tier: At this point, overall consistency begins to suffer. Gameplans (mostly) lack threats independent of player skill, to the point you're constantly working to maintain the momentum. In truly proficient hands, these characters are still able to play the game. But the player needs to be highly resourceful in order to make that reality so much as begin matter.

Barely Functional: Severe lack of offensive capability in a highly proactive game makes it hard for them to coerce opponents away from simply blocking/ignoring most of their actions. Has to play overly well to even generate anything resembling a meaningful win condition, let alone reward. Can still be a threat in the right hands, but are ultimately too lacking to remain relevant.

Almost Functional: If you want to win anything held to the barest of competitive standard, don't touch this tier.

Not Functional: These characters can't do anything substantial even in theory.

Jbelanger, also known as Jbel, is a top-level North American

F-Miyako main with a pocket

This tier list is from June 2020 and ordered within tiers. Some characters were left unranked due to lack of knowledge at the time, marked ??? on the list. Source: Twitter

ScrawtVermillion is a top-level North American

C-VSion player who has experience with a good proportion of the cast.

His most recent tier list, posted below, is from September 2021. A video breakdown explaining his thought process is available here. All tiers are fully ordered.

H-Mech
Play if you want to lose

F-Nanaya player from North America and the creator of the MBAACC frame data spreadsheet.

This tier list is from 2021 and unordered within tiers.

Onemi is a strong and very, very knowledgeable south american player. This tier list is not ordered within tiers.

The tiers are described here:

S+ Tier: Characters that have oppressive tools, strong setplay, strong neutral, damage, don't have to worry about meter, can confirm anything into their BnB, and their pros notably outweight their cons

S Tier: Same as the above, but tools aren't as oppressive/more notable weaknesses

S- Tier: Characters that are generally agreed on that there is a superior moon, but are very strong on their own (this tier isn't necessarily weaker than the one above, or stronger than the one below)(can also be common counterpicks e-g- F-Satsuki instead of C-Satsuki against Nero/Wara)

A+ Tier: Mixed bag of characters with super strong tools but notable weaknesses, and characters that don't have many weaknesses but have a single/pair of tools that are noteworthy, so overall not as oppressive

A Tier: Characters that even with their notable weaknesses, they still get good results in tournaments since their tools are always effective, or characters that people agree that they're good but lack the representation in tournaments (most characters in this tier have swingy matchups against others that can exploit their weaknesses e.g. F-Wara getting his movement limited against F-VAkiha, H-Sion losing important part of her 214A setplay against Hime, etc.)

A- Tier: Either good neutral, good offense or good defense, but not more than one at the same time. Some "jacks of all trades, masters of none" included.

B+ Tier: Unique tools that are very hard to use effectively and characters that have bad matchup spreads, but can win if they get going (highly momentum based).

Z- Tier: Joke characters, this is the only tier that's ordered 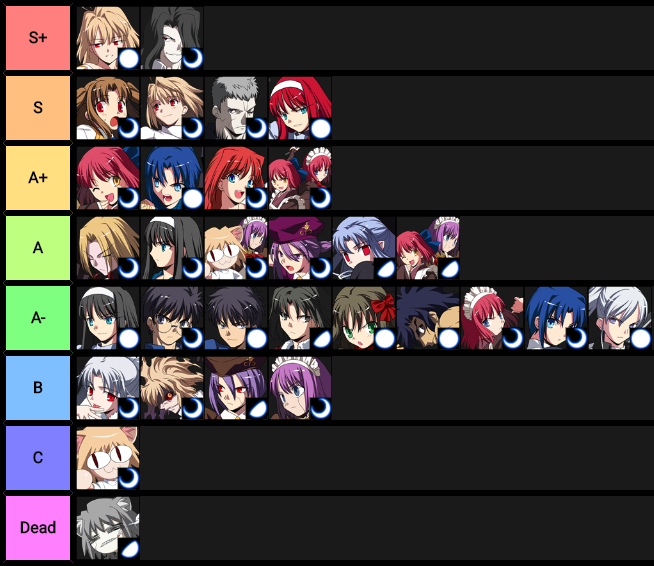 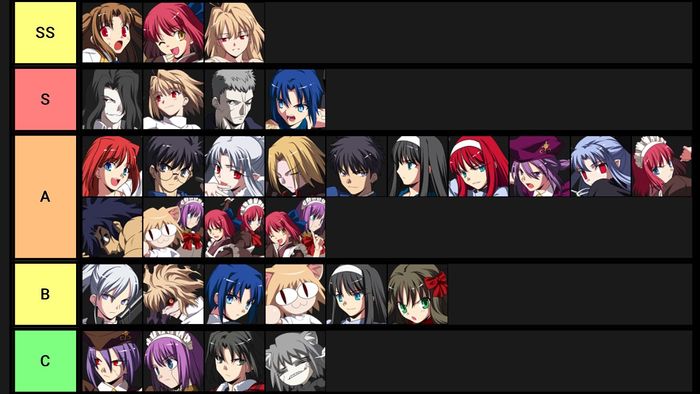 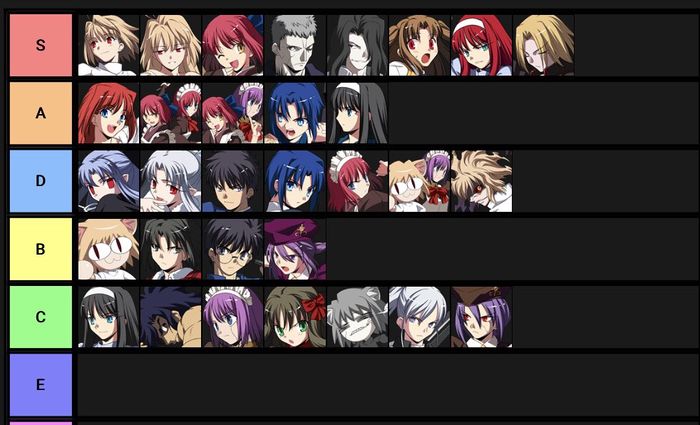 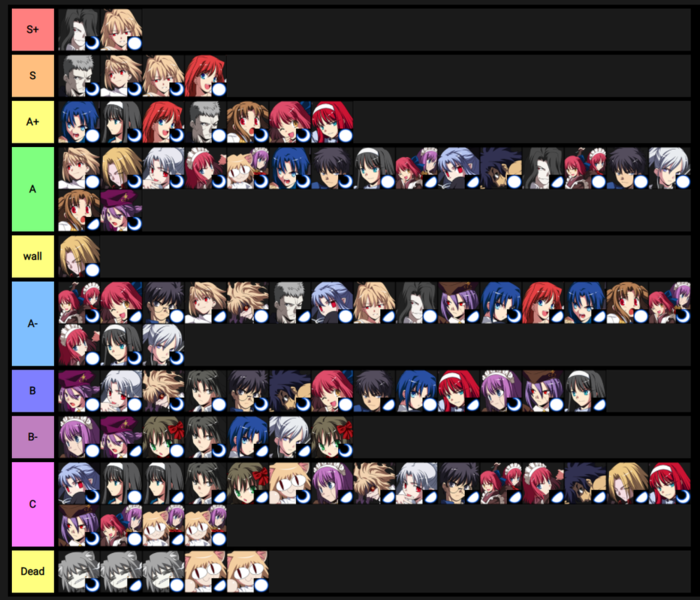 S+ to A+ tiers are not ordered in detail (all very strong) but the rest of the list is ordered within tiers. 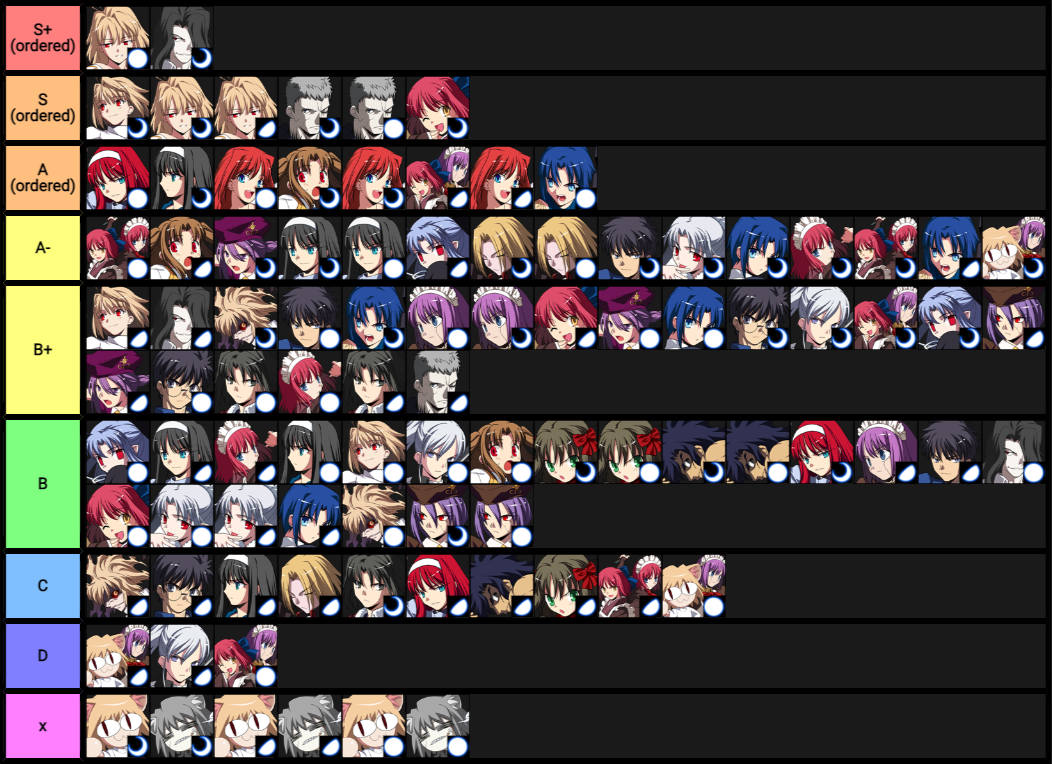