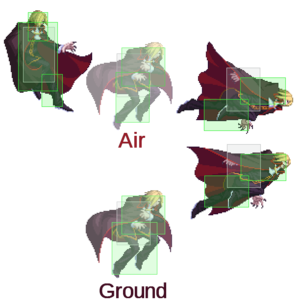 Always remember that F-Wara's dash is the only one that goes airborne. It's not very fast, so mobility isn't as great as his other Moons, but he makes up for this with mixups, zoning and move priority (eventhough his other Moons have plenty of it).

A few tips on his dash: If you're using A+B to dash, if you input 6A+B and instantly change your direction to 4, you will still continue dashing in the same direction. The only way to stop dashing is to put your stick to neutral, or let go of your direction keys, where you will start falling. If you are trying to do dash j.A instant overhead, if you input the j.A right after you let go of your directions, the forward and upward momentum will still continue, sending you further while doing j.A. This will have you fly over your crouching opponent, whiffing your overhead. To avoid this, input your dash, let go of your directions and let yourself fall for a teeny, weeny bit before inputting j.A. The j.A will come out while you are falling, keeping you in place and successfully hitting a crouching opponent.

236, 214 and 22 are all EX-cancellable, meaning they are IH cancellable as well. Basically, you can IH right after the projectile comes out.

F-Wara maintains the range of all his other Moons' j.B. As F-Wara's dash is airborne, you will find yourself spending a lot of time in the air if you choose to be more mobile. Use jB to keep your opponent at bay or to get counterhits. On the ground, you can use all his forms of the 22 series which he retains from the other Moons as well. As usual, use them wisely because they come out slowly and if you get hit, the tornado disappears. Don't react to jump-ins or rush-ins using them; predict when they will come at you and use them.

TK j.236 fireballs are also good zoning tools. TK j.2369A can get air CH's from careless jump-ins. More details on the fireballs are in the specials section.

F-Wara has quite good pressure tools at his disposal.

Normally, a combo with 623C will have parts 1, 5 and 9 land hits on the opponent. The most important part to remember is that no.9 MUST hit. This will kick the opponent up a final time to give you enough time to recover and followup. HOWEVER, if no.7 hits, chances are that the combo is ruined because this will hit the opponent and make no.9 whiff instead, causing him/her to hit the floor before you can followup. But do not fret, all of 623C's hits are untechable, so if you realize you cannot combo anymore, change to oki.

F-Wara's 214 Haze increases the aerial hitstun of your moves if your opponent is touching it. This makes certain combos possible in the presence of Haze.