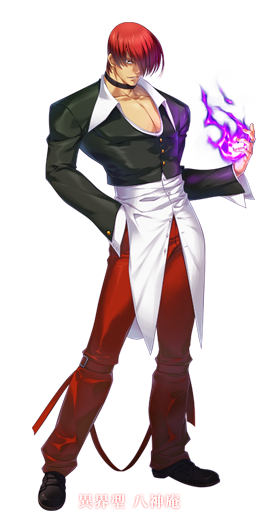 Iori was one of best characters in KOF '98. There's no need to tell you what he could do, because he could do everything. Unfortunately, he couldn't stop himself from using sweep, so he decided to go to an anime game where his sweep is cancelable.

Iori is a character who has a well rounded set of tools, with particularly good mix-up options thanks to his command grab, his j.4B air command normal, and his hyper hop which lets him get into the air very quickly for overheads and cross-ups.

Auto combo, keep mashing for super, or rekka ender if no meter.

Universal combo into rekka. Generally works even from far 5A hits.

5B starter that works at max range. Jump combo, rather unpractical but has potential with assists and is decent corner carry. Can end with 214D >214D > 263XX for 7018 damage.

Universal combo into command grab extension. Iori has to be somewhat close for command grab to connect. About as good as it gets against the handful of characters the super jump route doesn't work on.

Double super after command grab extension. If you're close enough to do the command grab extension then might as well just do the normal version with 2B unless you're trying to sideswitch.
From this point forward pretty much any double super route is done in the same way unless stated otherwise; 214D > 214D > 236XX > 5D > 623XX. (It's not advisable to do this unless it will kill.)

Variation on above combo that keeps throwing them backward for good corner carry in the opposite direction.

Super ender variation of the above combo, and optimal combo into super in general. 2x Super does 8265 damage.

Good for meter gain and potential air reset with 6C or another air throw.

Meterless damage route. Does a little less on Nitou (4496), as he only gets hit by the first and third hits of the DP. Can cancel first hit into ASOBI WA OWARI DA. If you just do 5AA > 623C but cancel on the second hit it does the same damage, if that's easier.

Note: Colors 20 and 21 were pre-order exclusives for JP PSN and Amazon respectively. Unfortunately, they aren't selectable on Steam without the use of Cheat Engine.